Coventry: Armed police in stand-off with father who refuses to come out of home with eight-year-old son 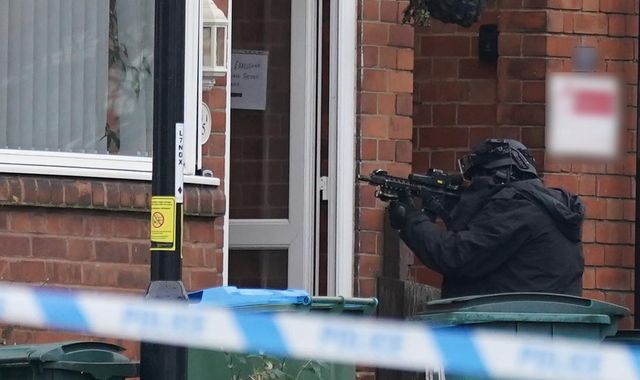 A house in Coventry has been cordoned off by police since early on Sunday amid concerns for the welfare of a man and his eight-year-old son.

It is understood the man has been refusing to come out of the property and a stand-off involving armed police and other specially trained officers continues in the Earlsdon area of the city.

One resident, who lives 10 doors down from the property, told Sky News around 20 armed police arrived at the scene at 8am on Monday morning.

Photos from the street showed an armed officer pointing their weapon at the front door of the building.

The resident said neighbours had been told by police to remain in their homes where possible but to ask for an escort through the cordon if they needed to go to the shops or work.

He told Sky News he did not know the father and son involved in the incident.

West Midlands Police said in a statement: “A cordon remains in place around a house in Earlsdon Avenue North, Coventry, this morning where a man has been refusing to come out since the early hours of yesterday morning.

“The 41-year-old has his eight-year-old son with him and there are some concerns for their safety.

“Several officers, including armed police and other specially trained officers, are at the scene to bring the incident to a safe conclusion.

“Unfortunately, residents, businesses, a school and travel are severely disrupted by the cordon.

“We’re sorry for the inconvenience, but our priority is the safety of those involved.”

People are being urged to avoid the area after several road closures were put in place.

A library at the junction of Earlsdon Avenue North and Albany Road has been opened for residents and officers to use.

Share
Facebook
Twitter
Pinterest
WhatsApp
Previous articleKeir Starmer says MPs do not need pay rise this year amid cost of living crisis as Downing Street urges ‘restraint’
Next articleCOVID-19: ‘End in sight’ but there will be more ‘bumps’ for next three months – WHO envoy