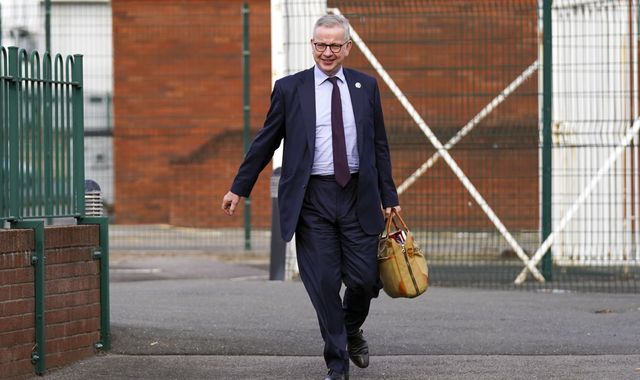 “We are coming for you” – that’s the warning due to be issued to unsafe property developers by Michael Gove, as he attempts to put pressure on developers to spend money on replacing dangerous cladding.

On Monday, the housing secretary is set to lay out his plans, which include tasking forensic accountants to track down those responsible and extending help to cover leaseholders of low-rise flats.

A draft of the housing secretary’s Commons statement suggests he will warn developers they must agree a £4 billion plan to fix dangerous cladding on low-rise flats by early March or risk new laws forcing them to act.

Potential action includes restricting access to government funding and future procurements, the use of planning powers, and pursuing firms through the courts.

The proposals come more than four years after the Grenfell Tower fire in June 2017, in which 72 people were killed.

Since then, the cladding scandal has trapped leaseholders in unsafe and unsellable homes.

Mr Gove is also due to announce that leaseholders in buildings 11 to 18 metres tall will no longer have to contribute to replacing cladding.

“I am putting them on notice. If you mis-sold dangerous products like cladding or insulation, if you cut corners to save cash as you developed or refurbished homes, we are coming for you,” the draft states.

The latest plans have emerged after a letter from Chief Secretary to the Treasury Simon Clarke to Mr Gove said loans for smaller buildings would be replaced by a “limited grant scheme”.

“You may use a high-level ‘threat’ of tax or legal solutions in discussions with developers as a means to obtaining voluntary contributions from them,” it read.

“I am pleased to see that you acknowledge the principle that the taxpayer should not be on the hook for further costs of remediation.

“To reiterate, my approval of this new package for 11m-18m buildings is therefore conditional on no further Exchequer funding.”

Speaking to Sky News on Monday, the housing secretary said he is prepared to “use legal means and ultimately, if necessary, the tax system” to ensure developers live up to their responsibilities to fix dangerous cladding.

“We want to say to developers and indeed all those who have a role to play in recognising their responsibility that we want to work with them,” he said.

“But if it’s the case that it’s necessary to do so, then we will use legal means and ultimately, if necessary, the tax system in order to ensure that those who have deep pockets, those who are responsible for the upkeep of these buildings, pay rather than the leaseholders, the individuals, who in the past were being asked to pay with money they didn’t have for a problem that they did not cause.”

Mr Gove said there could be a developers tax but stressed some had “been stepping up to the plate already” to remove dangerous cladding.

“There are others who still have more to do and it’s a straightforward question – should it be those with the big bucks, the big profits, who have been responsible for the construction of these buildings and who are the ultimate owners of these buildings? Or should it be individuals who have worked hard in order to get a mortgage and who are now being saddled with costs for faults that were not their responsibility?

“If you’ve got the question like that, then I think there can only be one answer.”

Government ‘must work with industry’

Stewart Baseley, executive chairman of the Home Builders Federation, said leaseholders should not have to pay for remediation of buildings.

“The largest UK based house builders, who only built a minority of the affected buildings, have already spent or committed approaching £1bn to remediate affected buildings and the recently announced Property Developers Tax will raise billions more,” he said.

“We will engage directly with government but any further solutions must be proportionate, and involve those who actually built affected buildings and specified, certificated and provided the defective materials on them.

“However, the most urgent action remains for government to define guidance and work with lenders, insurers, surveyors and the construction industry to understand what remediation work actually needs to be done to resolve issues for residents quickly and simply.”

Meanwhile, shadow housing secretary Lisa Nandy said “promises are no substitute for a plan” as she urged the government to go further to protect leaseholders from the costs.