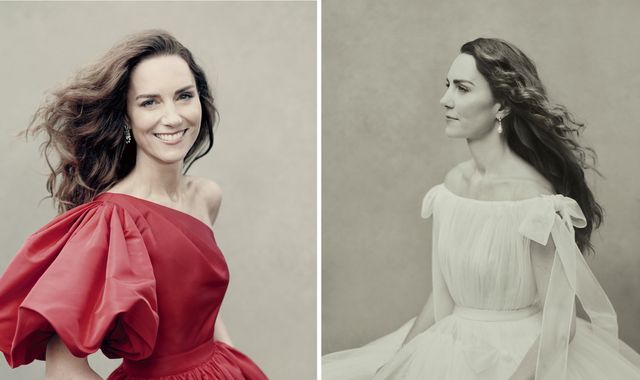 New photographs have been released of the Duchess Of Cambridge, celebrating her 40th birthday on Sunday.

The portraits, which were taken in Kew Gardens in west London last November by Paolo Roversi, will eventually become part of the permanent collection at the National Portrait Gallery once it reopens.

In one, wearing a red dress, she completed the outfit with a pair of the Queen’s earrings, which Her Majesty had loaned to her.

In another, she is seen wearing a pair of earrings belonging to Diana, Princess Of Wales – her late mother-in-law.

‘Moved by her warmth’

Roversi said that photographing the duchess was “a moment of pure joy” and said with her “positive energy” she can “bring hope to the whole world”.

He added: “I was moved by her warmth and friendly welcome and enchanted by her shining eyes that reflected the loveliness of her soul and her smile showing the generosity of her heart.”

Ahead of the venue’s reopening in 2023, the portraits will first hang in as-yet unannounced locations in Berkshire, St Andrews and Anglesey – places said to have a special meaning for the duchess.

The duchess famously met Prince William while at the University of St Andrews, marrying him in 2011 in the surrounds of Westminster Abbey.

Duchess is keen photographer herself

Since her marriage to the duke, she has had three children – George, Charlotte and Louis – and has devoted much of her public life to supporting the early years development of children.

Now, the milestone birthday will mark the start of an important few years for the future queen, who will be at her husband’s side as royal events intensify as lockdowns ease, and watch her children grow up.

The duchess has also emerged as a keen photographer herself, often stepping behind the camera rather than being in front of it.

In the past, she has used the couple’s Instagram account to document family life and those causes closest to them.

Here are some of her most iconic photos.

In May 2021, Prince Charlotte turned six and a picture snapped by Kate was shared on the Royal Family’s Instagram account.

Another picture, of Charlotte on her fifth birthday, was shared on the duchess’s Instagram page.

Both the Duke and Duchess of Cambridge have regularly spoken about the importance of tackling climate change, with William launching the Earthshot Prize in 2019.

Discussing the award, a picture of William at a glacier in the Hindu Kush taken by Kate was shared on 31 December 2019.

The duchess shared a picture of William and their three kids on Christmas Day in 2019 on social media. The image was taken in Norfolk earlier that year.

To commemorate Prince William’s 38th birthday, pictures of the duke playing with his kids were shared on the couple’s Instagram page.

On the eve of his birthday, another picture was shared of William, George, Charlotte and Louis, playing on a swing.

In July 2019, pictures of Prince George wearing an England shirt at Kensington Palace were shared to mark his sixth birthday.

A rare picture of the Queen and the Duke of Edinburgh with seven of their great-grandchildren was snapped by the Duchess of Cambridge at Balmoral Castle in 2018.

The image was shared by the Royal Family in April 2021, after the death of Prince Philip.