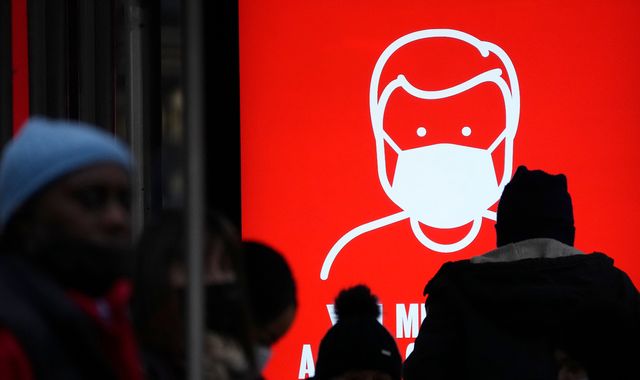 The latest government figures compare to 146,390 infections and 313 fatalities recorded on Saturday, which took the UK’s total COVID-related death toll to more than 150,000.

Since the beginning of the pandemic, 150,154 people have died within 28 days of testing positive for the virus.

Meanwhile, Education Secretary Nadhim Zahawi has told Sky News he is in favour of reducing the COVID-19 self-isolation period from seven days to just five.

At the moment, people in England who test positive can come out of isolation if they receive a negative lateral flow test on days six and seven – with the tests taken 24 hours apart.

If they still test positive, they have to continue to isolate for 10 days.

Mr Zahawi said the possible reduction is being looked at by the UK Health Security Agency (UKHSA) and stressed the government would have to be “careful” about making the change.

“It would certainly help mitigate some of the pressures on schools, on critical workforce and others,” Mr Zahawi told Trevor Phillips on Sunday.

“But I would absolutely be driven by advice from the experts, the scientists, on whether we should move to five days from seven days.

“What you don’t want is to create the wrong outcome by higher levels of infection.”

No plans to scale back free lateral flow tests

It comes following a report in The Sunday Times that the government is looking to scale back free lateral flow tests to high-risk settings – something Mr Zahawi said is “absolutely not” where ministers are at.

He confirmed that there were no plans to stop handing out tests free of charge, adding he did “not recognise” the story that they could be limited to care homes, hospitals, schools and people with symptoms.

Following the newspaper’s report, Scotland’s First Minister Nicola Sturgeon warned the UK government about scaling back tests, saying it would be “utterly wrongheaded”.

“Hard to imagine much that would be less helpful to trying to ‘live with’ COVID,” she tweeted.