COVID-19: PM warned it would be ‘wrongheaded’ to remove free lateral flow tests as parents urged to book jabs for children 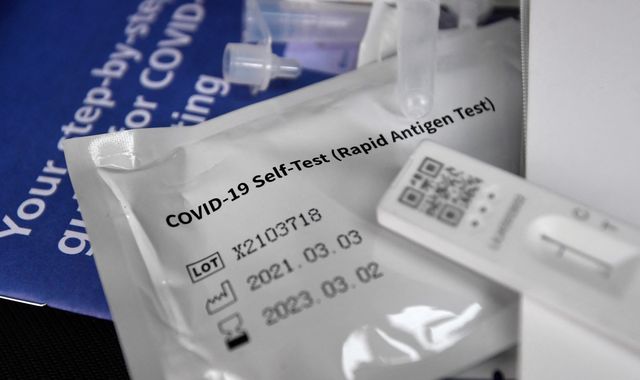 The prime minister has been warned it would be “utterly wrongheaded” to scale back free lateral flow tests following reports they could be limited to high risk settings.

Both the Labour Party and Scotland’s First Minister Nicola Sturgeon have warned Boris Johnson against the move amid concerns tests could be limited to care homes, hospitals and schools, and people with symptoms.

The Sunday Times said the announcement, which could come “within weeks”, may also see the NHS Test and Trace system scaled back.

The free rapid tests were first made available to everyone in England – including those without symptoms – last April.

However, according to a report in The Sunday Times, there are concerns in Whitehall over their costs.

The newspaper claims more than £6bn of public money has been spent on mass testing using the devices.

Ms Sturgeon said the Scottish government had not signed on to any plans.

“If UK government is really considering this (@scotgov certainly not signed up to it) it is utterly wrongheaded,” she tweeted.

“Hard to imagine much that would be less helpful to trying to ‘live with’ COVID.”

She also questioned what would happen to funding for UK nations for testing if the Westminster government did axe free tests.

“Testing so vital, we’d have to consider continued funding but it would then come from existing budgets,” she added.

How are the PCR test rules changing around the UK – and do I still need one?

He said: “Testing is absolutely crucial for keeping infections under control and avoiding the need for further restrictions that impact on our lives, livelihoods, and liberties.

“This additional cost will also hit families at a time when they face a cost of living crisis. It means people simply won’t take them, putting others at risk.”

A government spokeswoman did not address whether access to free tests will be scaled back in the future, but instead said: “Everyone can continue to get free tests and we are continuing to encourage people to use rapid tests when they need them.

It comes as the UK reported a further 146,390 new cases and 313 deaths on Sunday – although this is believed to be an underestimate.

Cases have hit record highs following the emergence of the new Omicron variant however, hospitalisations and deaths have not followed the same trajectory.

Professor Mike Tildesley, a member of the government’s Scientific Pandemic Influenza Modelling group (Spi-M), said on Saturday that the variant is possibly the “first ray of light” in COVID-19 becoming endemic and easier to live with.

“The thing that might happen in the future is you may see the emergence of a new variant that is less severe and, ultimately, in the long term, what happens is COVID becomes endemic and you have a less severe version,” he told Times Radio.

However, families have been urged to still get their children vaccinated to slow the spread of the virus and now half a million appointments have been made available to 12 to 15-year-olds across the country in January.

‘The vaccine is safe and effective’

Dr Nikki Kanani, GP and deputy lead for the NHS vaccination programme, said: “The vaccine is safe and effective – my 13-year-old son had his first vaccination when I had my booster at our local pharmacy and it gave us both reassurance that he was protected as well, and he has recently topped up his protection with a second dose.

“Young people can get their life-saving protection at a walk-in site or wait to get vaccinated at school, but the best way to make sure it happens quickly and conveniently is to book online now.”

Meanwhile, Education Secretary Nadhim Zahawi has become the first cabinet minister to back moves to reduce the self-isolation period from seven days to five, according to The Sunday Times.

“The UK Health Security Agency have said they want to review it, so we will stick to seven days but if they review it and say they will bring it down to five days that is even better for me, it’s even more helpful,” he told the newspaper.

More than 1.4 million young people have already had their first dose since the vaccine was rolled out to this age group in September, with thousands getting jabbed every day.

However, there are still over one million young people who are yet to get their first dose.

All children aged 12 to 15 are also eligible for a second dose of vaccine if it has been more than 12 weeks since their first jab, and more than 50,000 will be invited for their second dose as they become eligible this week.