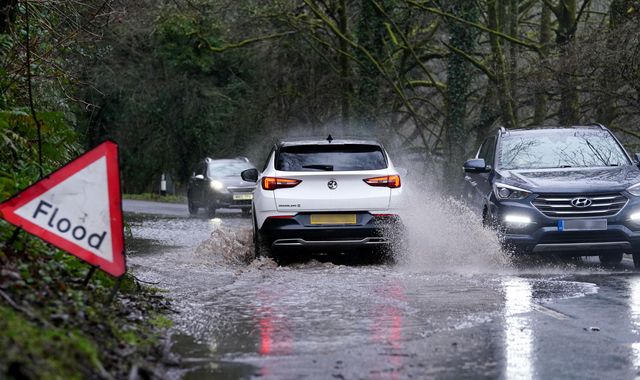 Several flood alerts have been issued as the UK faces a wet and wintry weekend.

A yellow weather warning for ice was in place on Friday night for Scotland and parts of southern England and Wales, with some areas seeing as much as 11cm (4.3in) of snow.

And the threat continues, particularly in Scotland, where there remains a high chance of ice patches throughout the nation.

The Met Office has said a deep area of low pressure to the north west of the UK is bringing hill snow and heavy rain to many parts.

The Environment Agency in England has nine flood alerts in place, meaning flooding is possible. There are also five alerts in Wales, with none in Scotland.

One of the England alerts covers the Barnstaple, Braunton, Ilfracombe and Combe Martin area on the North Devon coast.

Exmoor Rivers, Lower River Soar in Leicestershire, the Mid Bristol Avon area, and the Middle Exe area are also covered by alerts, along with the Rivers Clyst and Culm and their tributaries, the Rivers Duddon, Crake and Mill Beck, the Severn Vyrnwy confluence and West Somerset Streams

The forecast adds: “Some early hill snow in the North. Brighter, colder weather with heavy, blustery showers, wintry over hills, follows from the West. Windy and blustery.”

NHS Greater Glasgow and Clyde (NHSGGC) has issued some unusual advice to “walk like penguins” in the icy conditions to avoid injury.

The health service is urging people to bend their knees loosely, point their feet out slightly, extend their arms at their sides, walk flat-footed – taking short steps, and to keep their centre of gravity over their feet in order to avoid falling.

Linda de Caestecker, director for Public Health at NHS Greater Glasgow and Clyde, said: “While it might seem silly to walk or waddle like a penguin, in the context of the wintery conditions we’re seeing today, penguins know best.

“If you find yourself out and about in icy conditions, adopting the penguin stance is a really effective way to move without falling.”

Temperatures in Scotland are expected to be between 6C (43F) and 8C (46F) and feeling cold in the brisk west wind.

Into Sunday afternoon, conditions in Scotland are forecast to be dry and bright for most, with temperatures expected to be between 4C (40F) to 7C (44F).

The forecast on Sunday in England is mainly dry and bright but with occasional showers in the West.

Outbreaks of rain are likely to spread east Monday, with the far southeast staying dry.