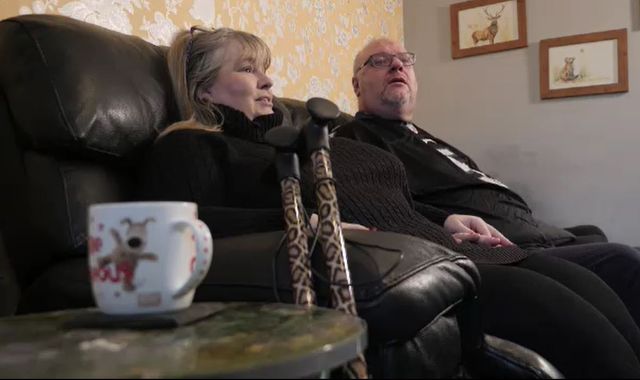 In the last four years their lives have been turned upside down.

Shortly after they were married Natasha had to have a tumour removed from her spinal column which damaged nerves and left her mobility compromised.

She had to stop working and, after trying to juggle employment and looking after his wife, Gary did too.

After 25 years in the civil service he left to become her full-time carer, sharing their house in Lincolnshire with three children, two of whom are still in education.

In place of joint salaries in excess of £50,000 they now rely on his carer’s allowance of £67-a-week and Universal Credit.

So when energy bills went up last year they felt it.

Natasha needs the house to be warm to prevent pain in her limbs, so their bills are high, but in the autumn they got higher, and worse is to come when the energy price cap increases, perhaps by as much as 50%, in April.

How does he feel about a further increase when the energy price cap goes up in the spring?

“It’s daunting, totally unsustainable for us,” he said.

“I know people in a similar situation to ourselves who already can’t afford it so goodness knows what it is going to be like.”

“It stresses me out,” says Natasha.

“What do you do? It’s a frightening prospect.

“I guess it’s going to be more for food than it is for heating and it’s just a case of having to wrap up warm, but it doesn’t help me with my prognosis.

“And I’m sure there’s other people out there who are suffering different ailments that need the heat. There should be more help available.”

Gary and Natasha do receive the Warm Homes Discount, a £140 annual rebate highlighted by the prime minister this week and available to 2.2 million households.

Next winter it is due to rise by £10 and extend to another 800,000 homes, and increasing the uplift or extending its reach is one of the options being considered by ministers, who want to target support at the most vulnerable.

But it barely covers a month’s energy costs as it is and the £10 increase will be dwarfed by the £700 or so about to be piled onto the average bill.

And even if more money is made available it is ultimately paid for by other energy users, from the policy costs that currently account for 12% of bills.

The challenge for the prime minister is that while the poor will be hardest hit, the coming increase will be so large all but the most affluent households will feel it.

If that has motivated his demand to ministers that “something must be done”, the problem for the chancellor is there are no cheap or easy answers.

Price increases have been driven by soaring wholesale prices determined by international markets that account for more than 40% of bills.

The UK has minimal storage and has relied on competition between new “suppliers” whose business models often amounted to a gamble on wholesale prices staying low.

As they rose above the current price cap, more than 20 suppliers have been submerged, and consumers have been left with nowhere to go.

VAT could be cut but it is just 5% on fuel, and the exchequer already stands to lose out as household income that might have been spent on higher-taxed goods is diverted to pay bills.

Conservative backbenchers and the energy industry favour suspending the policy costs that make up 12% of bills.

As well as the Warm Home Discount, they also include green levies which help fund the decarbonisation projects.

Just two months on from COP26 it would be perverse to address an over-reliance on imported fossil fuels by cutting funding for renewables that represent the UK’s best chance of energy self-sufficiency.

Suppliers would like more direct support in the shape of government-backed loans and help in the wholesale markets but funding profit-making PLCs is politically harder than assisting consumers.

And whichever way the chancellor turns the cost is enormous.

The price cap increase could add around £20bn to household bills and almost 2% to inflation and there is no guarantee of a timely return to lower prices.

The pain of this energy crisis will be shared by families and businesses across the economy, but it will still be most acute for those like Gary and Natasha least able to afford it.