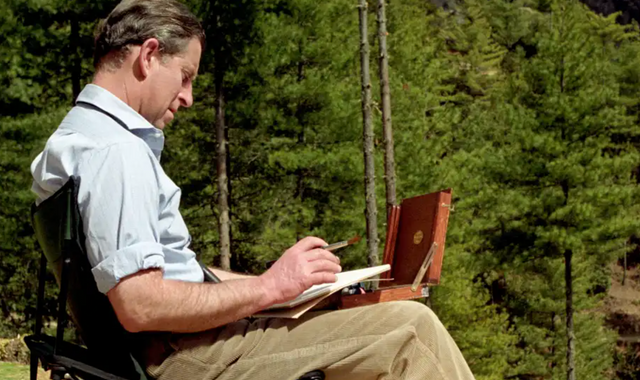 A collection of Prince Charles’ watercolour paintings of his favourite places to relax will be displayed over the next month.

At least 79 of the future king’s artwork pieces will be exhibited at The Garrison Chapel in Chelsea, London, until 14 February, located in The Prince’s Foundation exhibition space.

The paintings depict Scottish landscapes such as the Huna Mill in John O’Groats and Glen Callater near Balmoral, as well as outdoor scenes from Provence in the south of France and Tanzania in East Africa, which is one the Prince of Wales’ favourite places to paint.

A display panel in the exhibition has revealed Charles finds his hobby “refreshes parts of the soul which other activities can’t reach”.

He also added he started painting after struggling to enjoy photography.

He said: “You become increasingly aware of things that may have escaped your attention previously – things like the quality of light and shade, of tone and texture and of the shape of buildings in relation to the landscape.

“It all requires the most intense concentration and, consequently, is one of the most relaxing and therapeutic exercises I know.

“In fact, in my case, I find it transports me into another dimension which, quite literally, refreshes parts of the soul which other activities can’t reach.”

But Charles, who has been relaxing over the Christmas period with wife Camilla, the Duchess of Cornwall, and the Queen at Windsor Castle, admitted he was “appalled” by the quality of his early sketches.

He said: “I took up painting entirely because I found photography less than satisfying.

“Quite simply, I experienced an overwhelming urge to express what I saw through the medium of watercolour and to convey that almost ‘inner’ sense of texture which is impossible to achieve via photography.

“I very quickly discovered how incredibly difficult it is to paint well in such a spontaneous medium, and the feeling of frustration at not being able to achieve on paper the image that your eye has presented you with is intense.

“Looking back now at those first sketches I did, I am appalled by how bad they are. But, nevertheless, the great thing about painting is that you are making your own individual interpretation of whatever view you have chosen.”

Rosie Alderton, curating the exhibition for The Prince’s Foundation, added: “His Royal Highness has said before that he likes to sit in the actual environment and paint en plein air, and that, for him, taking a photograph doesn’t have the same feel as a painting.

“His passion for creating beautiful art is conveyed strongly in this exhibition.”