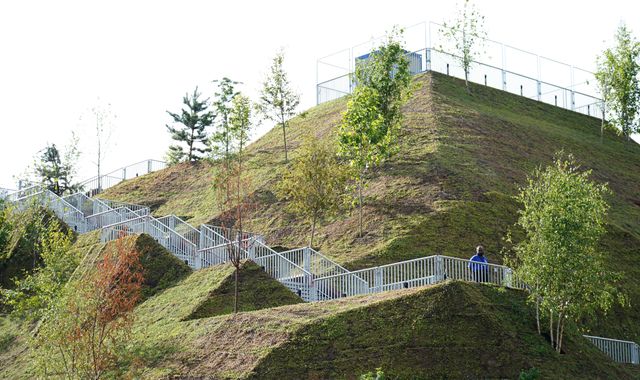 The much maligned Marble Arch Mound is set to close this weekend.

Set in the heart of London on the corner of Hyde Park and Park Lane, the £3.3m attraction was commissioned by Westminster City Council and ended up costing £6m.

According to the Evening Standard, more than a quarter of a million people have since visited despite its poor reception – 200,000 more than forecast.

What is the mound?

Located in one of the most tourist-rich parts of the capital, the Marble Arch Mound opened in July 2021 to try to increase footfall in the pandemic-ravaged West End.

It consists of a man-made structure, covered in grass and young trees, and a path to the top.

According to the Westminster City Council website, it offers views “never seen before by the wider public”.

An exhibition space was also put inside for people to explore on the way down.

What was the reaction?

Visitors immediately started to demand refunds for tickets – which could cost up to £8 for an adult.

The main issue was the fact the mound had not been completed – with the council admitting at the time “elements are not yet ready for visitors”.

One visitor branded it “the worst thing I’ve ever done in London”, while others have compared the landscape to a platform on a game of Sonic The Hedgehog.

Less than a month after opening, access to the attraction was made free, and has remained so ever since.

Concerns were also raised about the cost of the venture.

So how much did it cost?

Initially slated at £3.3m, the final bill came out at almost double the price – £6m.

Following the revelation, the deputy leader of the Conservative-run council – Melvyn Caplan – resigned.

And the council’s leader, Rachael Robathan, said: “The Mound opened too early, and we apologise for that.

“It has become clear that costs have risen more than anticipated and that is totally unacceptable.”

A report was commissioned by the council, which found the “robust processes” put in place were “circumvented” to get the mound open quickly.

The report added failures were “avoidable” and “devastating”.

After Sunday, the mound is due to be removed. The Evening Standard says this could take four months.

It is not certain what will then happen to the structure or the area where it stood.