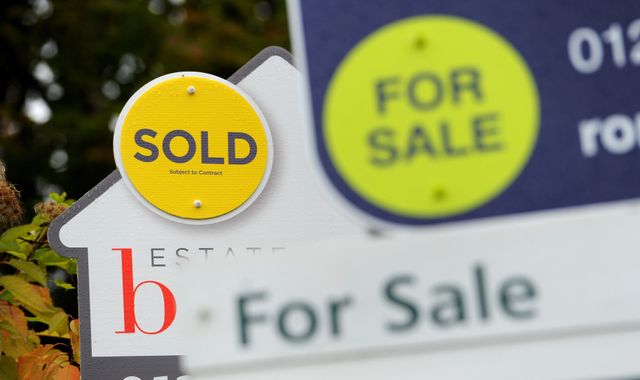 Annual house price growth hit a 17-year high as the market “defied expectations” in 2021 – but is likely to slow considerably in the coming year, Halifax said.

The 9.8% year-on-year increase for December was the biggest since July 2007 and represented the strongest calendar year growth since 2004, according to the lender.

It is the latest confirmation of a buoyant housing market in 2021 as a lack of homes for sale combined with historically low mortgage rates drove prices higher.

But interest rate hikes and wider cost of living increases could put the brakes on the surge.

Month-on-month growth in prices was 1.15 while the quarter-on-quarter increase of 3.5% was again the strongest since 2006, the lender said.

Greater London saw the slowest growth, of 2.1%, though average prices of £525,351 in the capital were still well ahead of other parts of the country.

“In 2021 we saw the average house price reach new record highs on eight occasions, despite the UK being subject to ‘lockdown’ for much of the first six months of the year.”

“This factor, alongside the stamp duty holiday and the race for space as a result of homeworking, will have encouraged buyers to bring forward home purchases that may have been planned for this year,” he added.

Meanwhile, government support for jobs and incomes during the crisis “may have given some households the confidence to proceed with purchases”.

“However, there are many variables which could push house prices either way, depending on how the pandemic continues to impact the economic environment.”

The figures come after another index from lender Nationwide recorded house price growth at 10.4%, making it the strongest calendar year since 2006.