COVID-19: R rate in England increases – here’s the latest data as Omicron surges across the country 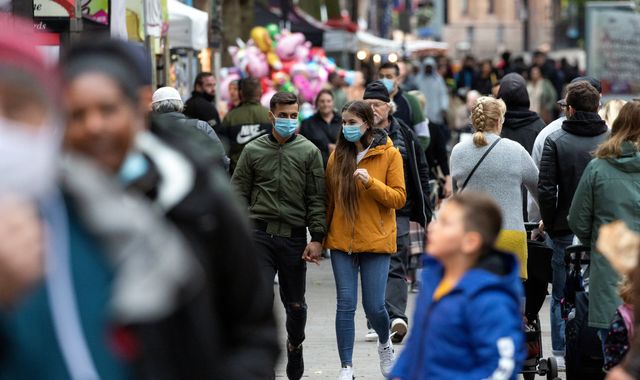 The R rate in England has increased and is now estimated to be between 1.2 to 1.5, according to the latest figures from the UK Health Security Agency – as new data shows the Omicron strain sweeping across the nation.

The reproduction figure means that for every 10 people with coronavirus they will, on average, infect between 12 to 15 people.

He told a Welsh government news conference the Omicron “storm” had hit Wales as he confirmed the continuation of restrictions.

Live COVID updates from across the UK and world

“Wales is taking action, as is Scotland, as is Northern Ireland, and as are countries right across Europe, and right across the globe,” he said.

“The one country that stands out as not taking action to protect its population is England,” he continued, describing it as a “global outlier” in the fight against Omicron.

NHS staff absences due to COVID in England triple

The number of NHS staff in England off work or isolating due to COVID has more than tripled since the start of December, according to the latest data from NHS England.

This was five days after Christmas, when many people would have been mixing with their families.

The total includes staff who were ill with coronavirus or who were having to self-isolate.

Dr Chaand Nagpaul, council chairman of the British Medical Association (BMA), told Sky News some NHS staff still could not access the lateral flow tests needed to allow them to return to work after seven days of isolation instead of 10 days.

More than 87,000 NHS staff were off ill or isolating on 30 December

Additional data from NHS England on staff absences in hospital trusts for all sickness reasons or self-isolation shows that during the two weeks from 20 December to 2 January, absences were highest on 30 December.

On this day alone, more than 87,000 NHS workers were absent.

By comparison, absences had been hovering at around 60,000 in late November and early December.

The number of delays of more than 60 minutes also peaked on 30 December with a a total of 1,443, according to new NHS England figures.

Some 10% of patients waited more than an hour to be handed over.

Nearly one in four patients arriving at hospitals in England by ambulance last week waited at least 30 minutes to be handed over to A&E departments.

Some 19,099 delays of half an hour or more were recorded across all hospital trusts in the seven days to 2 January.

This equated to 23% of all arrivals by ambulance, up from 13% the previous week and equalling the level recorded in early December.

The latest impact of the COVID-19 pandemic has prompted the public and emergency services in two areas to declare a major incident.

Staffordshire Resilience Forum is made up of multiple agencies such as the NHS, fire and rescue Service, police and councils.

The recent Omicron surge has led to the decision – the third time since the beginning of the pandemic that a major incident has been declared in the area.

Of the 13,045 patients with coronavirus in NHS hospital trusts in England on 4 January, a total of 8,200 (63%) were being treated primarily for COVID-19, according to data from NHS England.

This is down from 67% a week earlier and 74% at the start of December.

Almost 80,000 more 111 calls were answered this week than the previous week.

The NHS says almost 3,000 critical care and general acute beds have been closed due to COVID or norovirus over the last week and it is still struggling to discharge patients who are medically fit to return home.

There are some 10,000 of these still in hospital but cannot be sent home because there is no community care available for them.

Again this is largely driven by the surge in COVID infections.

A total of 231,856 booster and third doses of COVID-19 vaccine were reported across the UK on Thursday, new figures from the UK’s four health agencies show.

More than 35 million booster and third doses have now been delivered in the UK, with just over one million in the past seven days.

Nearly 66% of all adults in the UK have now received a booster or third dose.

Around six in 10 adults (63%) reported they avoided physical contact with others outside their home in the past seven days, according to figures from the Office for National Statistics.

However, of those that did see others (excluding for work or education), around seven in 10 (69%) socialised indoors, while almost half (47%) met up outdoors.

The Office for National Statistics has confirmed more than three million people had coronavirus in the last week of 2021.

The ONS infection survey for shows 3.7 million people were infected with COVID – up from 2.3 million in the week before Christmas.