COVID-19: Health Secretary Sajid Javid says there will be a ‘rocky few weeks ahead’ for NHS as two major incidents declared 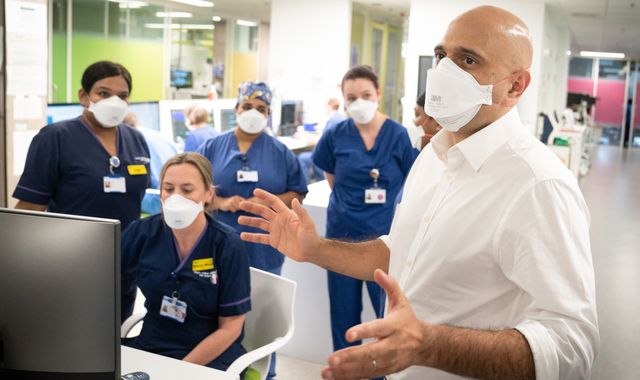 The NHS is facing a “rocky few weeks ahead” as it contends with a wave of Omicron cases, the health secretary has said – as two major incidents were declared in England due to pressures caused by the COVID variant’s spread.

Speaking during a visit to King’s College Hospital in south London, Sajid Javid said these were “challenging times” for the health service and the “best thing” people could do was get their COVID-19 booster jab.

Commenting on the impact of booster jabs, the health secretary said: “We know now that Omicron is less severe… and we certainly know that once you get boosted that your chance of hospitalisation, our latest analysis shows, is almost 90% less than it was with Delta.”

However, a source at the Department for Health and Social Care later clarified that Mr Javid was referring to three doses of COVID vaccine providing around 90% effectiveness against hospitalisation for Omicron.

The health secretary did not mean to make the comparison with Delta, the source added.

Elsewhere in his remarks, Mr Javid said he had been told that in King’s College Hospital’s intensive care unit for COVID patients an estimated 70% of patients were unvaccinated.

His comments come after emergency services have said there is a civil emergency in Staffordshire and Stoke-on-Trent.

It comes after it was announced that some 200 Armed Forces personnel will be sent to support the NHS in London as hospitals grapple with staff shortages.

Latest NHS England figures show 39,142 NHS staff at hospital trusts were absent because of COVID on 2 January, an increase of 59% on the week before (24,632) and more than three times the level it was at the start of December.

Dr Chaand Nagpaul, council chairman of the British Medical Association, told Sky News “we have never known this level of staff absence before” and the pressures facing the health service and GPs are “not normal”.

And he warned the government that it cannot “just wait to ride this out” and must do three things to relieve unprecedented pressure on the NHS.

Asked about hospitals declaring critical incidents, Mr Javid said there was a need for health services to “work together” because of the “workforce pressures” facing hospitals.