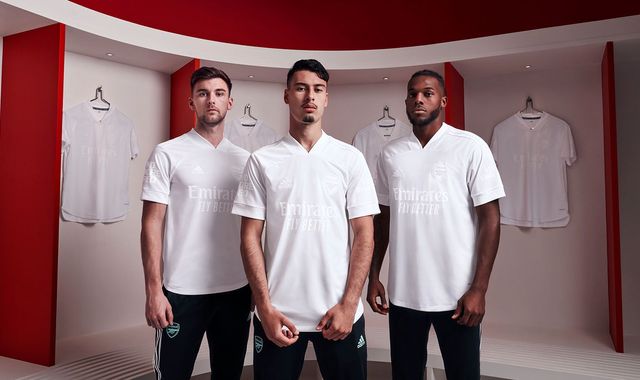 Arsenal will wear all-white jerseys for Sunday’s FA Cup match as part of a campaign against youth violence after London saw a record 30th teenage homicide in a year.

The Premier League side will roll out its “No More Red” campaign, which will see its jersey’s drained of their traditional red colours.

It comes after a 16-year-old boy was stabbed to death and became London’s 30th teenage homicide in 2021.

Players will wear the all-white jerseys for the third round tie against Nottingham Forest.

“The white shirt is a symbol of that stand against knife crime,” said Jack Ironside, who has worked on Arsenal’s schemes in London communities for 15 years.

“That trauma is lived by their friends and their families that live on. But what we’ve got an opportunity to do here is raise awareness and look at solutions – not answers. We don’t have the answer but positive contributions.”

The one-off kits will not be sold, but those worn by the starting 10 outfield players in Sunday’s match will be released as gifts to community organisations working to tackle the causes of youth violence.

“Our priorities are social outcomes rather than sports outcomes,” he told the Associated Press.

“What we’re trying to do with this campaign is really try to raise awareness and create awareness around this important issue and then make some tangible differences.”

The campaign includes offering hope to youngsters and renovating football facilities they can use.

“Those are much more than football pitches,” Mr Ironside said.

“They are actually safe spaces for young people to spend their time and connect with others and spend time with positive role models.

“What we are trying to do there is actually work with young people off the pitch rather than on it. So that the pitch itself and that football activity is the tool to engage. But it’s actually how we support them away from that football pitch that really matters.”

‘Nothing can easily turn to something dangerous’

A video for the campaign features actor Idris Elba, who grew up in London and has launched his own “Don’t Stab Your Future” initiative.

“From the time young people leave school, until the time they’re at home with family, there is often a void, a dangerous spike of nothing to do, where nothing can easily turn to something dangerous,” Elba said in a statement.

“If there continues to be no options for this after-school period, we will always see gangs form. Let’s create options for these young people.”

Share
Facebook
Twitter
Pinterest
WhatsApp
Previous articleMan pleads not guilty to cutting throats of girlfriend and associate
Next articleCOVID-19: Troops deployed to London hospitals as Johnson warned he can no longer be ‘dismissive’ about NHS staffing levels