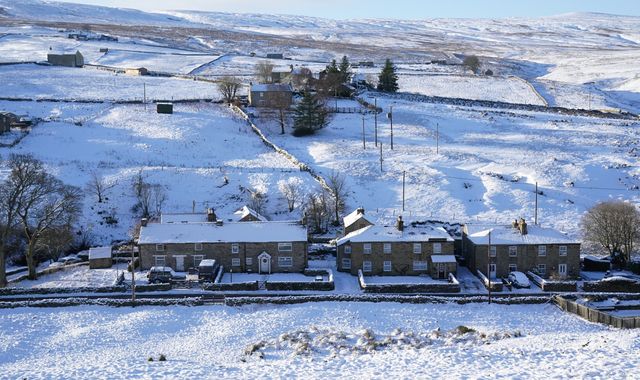 The big chill has arrived for many parts of the UK, as yellow warnings for snow and ice have been issued for parts of northern England and Scotland for today and tomorrow.

The Met Office has forecast snowfall in Greater Manchester, Lancashire, Cumbria, Merseyside, Yorkshire and Scotland between 10am and 4pm, followed by freezing conditions in the evening and wintry showers into Friday.

After a bitterly cold and frosty start on Thursday morning as temperatures dropped to sub-zero temperatures across most parts of the UK overnight, a band of rain and hill snow will arrive from the west.

Met Office spokesman Grahame Madge said: “We will start to get this weather front coming in from the west.

“We are going to see that moisture-laden air coming in, bumping into this cold air and whenever you get that you tend to get transient snow. It’s likely to last for one or two hours.”

Forecasters are warning that the snow may cause some travel disruption over higher routes during the day with two to five centimetres likely above heights of 200 to 300 metres, and 10 to 15cm above 400 metres.

They expect strong winds to lead to drifting and blizzard conditions in the Hebrides and coastal areas of Scotland.

Frequent wintry showers on Thursday evening and overnight could also be followed by a fresh covering of snow for areas above 200 metres, with freezing conditions returning and more possible travel disruption.

National Highways warned of a “severe weather event” on it’s website and has issued a “severe weather” alert for snow affecting the north of England and the West Midlands between 10am on Thursday until 6pm on Friday.

It advised road users intended to travel through the affected regions to check the weather forecast and road conditions before travelling.

“Please take extra care and allow plenty of extra journey time. In accordance with current guidelines, please consider whether your journey is absolutely necessary before setting off,” its website read.

The Met Office’s first warning, which comes into force at 10am, states: “Snow may cause some travel disruption over higher routes.

“Some roads and railways are likely to be affected with longer journey times by road, bus and train services.

“A band of rain will move eastwards across the UK during Thursday, with this likely to fall as snow for a time, particularly over hills.”

It added that many places will see one to two hours of snow with a risk of “temporary slushy accumulations” above 100 to 150m with snow leading to difficult travel conditions.

“A longer period of snow is expected over higher ground with two to five centimetres likely above 200 to 300 metres, and 10 to 15 cm above 400 metres. Over higher routes, strong winds will lead to drifting and temporary blizzard conditions.”

Another yellow warning – which runs from 8pm today until 11am on Friday – reads: “Frequent sleet, hail and snow showers may lead to some disruption to travel during Thursday night and Friday morning.

Mr Madge said: “Friday into Saturday we have got another frontal system moving across the UK. That’s more likely to deliver rain more widely.

“By Saturday and into the weekend any wintry showers are likely to be just over the higher tops and fells.”