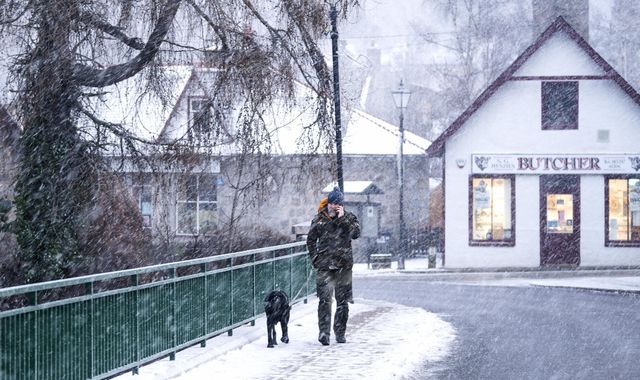 Thundersnow is expected to hit parts of the UK, with forecasters warning snow showers and lightning strikes could disrupt travel and cause power outages – after the coldest night of the winter so far in England.

The big chill has arrived for many areas, as yellow warnings for snow and ice have been issued by the Met Office for parts of northern England, western Scotland and Northern Ireland for today and tomorrow.

It has forecast snowfall in Greater Manchester, Lancashire, Cumbria, Merseyside, Yorkshire and Scotland between 10am and 4pm, followed by freezing conditions in the evening and wintry showers into Friday.

It follows Topcliffe in North Yorkshire recording a chilly -8C (17.6F) overnight, making it the lowest temperature recorded in England this winter.

After a bitterly cold and frosty start on Thursday morning as temperatures dropped to sub-zero temperatures across most parts of the UK overnight, a band of rain and hill snow will arrive from the west.

Forecasters said the prospect of thundersnow – expected to hit western Scotland today and tomorrow – is driven by the same conditions which cause thunder in the summer, the difference in temperature between the ground and the air surrounding it.

Met Office spokesman Grahame Madge said: “Because you have got that differential it’s possible, quite easily, for warm air at ground level when it heats up to start to rise very quickly up through the cold air and that’s what creates the potential for thunderstorms, so we are likely to see along with the other wintery showers, likely to see hail and snow.”

Sky News weather producer Joanna Robinson said: “Rain will spread across all areas today, bringing snow to higher ground in Scotland, northern England and Wales. Strong winds on the hills will bring the risk of drifting and blizzards too.

“Blustery, wintry showers will follow, with local thunder possible in the west, mainly the Northwest.

“A thunderstorm that occurs with wintry precipitation is called thundersnow and is quite rare.

“The lightning can appear brighter because of the light reflecting off the snowflakes, but the snow can dampen the sound of thunder.”

Ice will be an additional hazard, bringing tricky travel conditions, she said.

“There’ll be frequent wintry showers in the north and west overnight, with snow accumulating on northern hills. Up to 10cm is possible on the highest ground, with some slushy accumulations at low levels.”

National Highways has warned of a “severe weather event” on it’s website and issued a “severe weather” alert for snow affecting the north of England and the West Midlands between 10am on Thursday until 6pm on Friday.

It advised road users intended to travel through the affected regions to check the weather forecast and road conditions before travelling.

“Please take extra care and allow plenty of extra journey time. In accordance with current guidelines, please consider whether your journey is absolutely necessary before setting off,” its website read.

Forecasters are warning that the snow may cause some travel disruption over higher routes during the day.

Some brief power outages are possible with a risk of isolated lightning strikes, the Met Office said.

They expect strong winds to lead to drifting and blizzard conditions in the Hebrides and coastal areas of Scotland.

Frequent wintry showers on Thursday evening and overnight could also be followed by a fresh covering of snow, with freezing conditions returning.

Friday will see further showers, with hail, sleet, snow and thunder possible, but the showers will ease later

The Met Office’s first warning, which comes into force at 10am, states: “Snow may cause some travel disruption over higher routes.

“Some roads and railways are likely to be affected with longer journey times by road, bus and train services.

“A band of rain will move eastwards across the UK during Thursday, with this likely to fall as snow for a time, particularly over hills.”

It added that many places will see one to two hours of snow with a risk of “temporary slushy accumulations” above 100 to 150m with snow leading to difficult travel conditions.

“A longer period of snow is expected over higher ground with two to five centimetres likely above 200 to 300 metres, and 10 to 15 cm above 400 metres. Over higher routes, strong winds will lead to drifting and temporary blizzard conditions.”

Another yellow warning – which runs from 8pm today until 11am on Friday – reads: “Frequent sleet, hail and snow showers may lead to some disruption to travel during Thursday night and Friday morning.”

Mr Madge said: “Friday into Saturday we have got another frontal system moving across the UK. That’s more likely to deliver rain more widely.

“By Saturday and into the weekend any wintry showers are likely to be just over the higher tops and fells.”