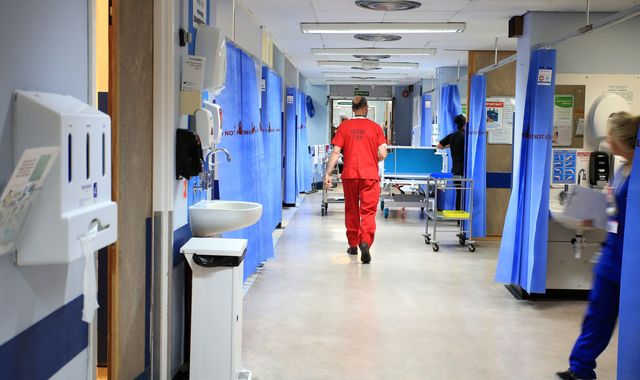 Plans to tackle the record waiting list for NHS treatment could be derailed by emergency care demands and a lack of staff, MPs have warned.

The backlog of patients waiting for planned care in England has soared to nearly six million as the number of 999 calls and A&E waiting times have both hit record highs.

In its new report, the cross-party Health and Social Care Committee said that tackling the wider backlog caused by the pandemic is a major and “unquantifiable” challenge as it includes all the people who have yet to come forward for care.

Are hospitals a hotbed for transmission?

MPs said NHS staff are under pressure and could quit unless they see “light at the end of the tunnel” in the form of more staff to help them deal with the pressures on the health service.

The report said: “Now, as we approach a third year living with COVID, the catastrophic impact on patients waiting for NHS care is becoming clearer.

While MPs welcomed government funding to create an extra nine million checks, scans and operations, they said NHS England has yet to publish its plan on “how it plans to meet its workforce requirements”, despite this being promised by Health Secretary Sajid Javid by the end of November 2021.

“The current wave of Omicron is exacerbating the problem, but we already had a serious staffing crisis, with a burnt-out workforce, 93,000 NHS vacancies and no sign of any plan to address this.

“Far from tackling the backlog, the NHS will be able to deliver little more than day-to-day firefighting unless the government wakes up to the scale of the staffing crisis facing the NHS, and urgently develops a long-term plan to fix the issue.”

Speaking separately to Sky News, Mr Hunt claimed the government had “solved the most difficult problem of all”, which is “finding the money to address these problems” through the health and social care levy that will be funded by a rise in National Insurance contributions.

“The result of that is that people aren’t worrying now across the NHS about money. What they’re worrying about is workforce.”

He added: “We haven’t had a plan from the government as to where those doctors and nurses are going to come from and that is the biggest single gap at the moment.”

Joanna Goulding, a 49-year-old from Warwickshire, has been in agony since the start of the pandemic, waiting for a hip, shoulder and two elbow replacements.

She has lived with rheumatoid arthritis since she was seven and already had both her hips replaced aged 22.

She first thought her left hip would need to be replaced again at the start of 2020.

When she finally saw a consultant at the end of last year, she was told the joint had been dislocated for the last six months.

“I’ve become housebound for the most part now. I’m unable to do things like go shopping. I can’t take my children to the park.

“I feel forgotten about and abandoned and desperate because this isn’t living, it’s existing at the moment and it’s just hideous.”

“The biggest barrier to tackling the backlog caused by the pandemic is a severe staffing crisis and our calls for improved workforce planning have thankfully been heard. It’s now time for the government to listen too.”

Siva Anandaciva, chief analyst at The King’s Fund think tank, said: “The unfortunate truth is there simply aren’t enough staff at the moment to deliver the volume of care that we need.

“Until there’s a national plan to grow and recruit and retain more stuff for the healthcare sector, it’s really hard to see how backlogs can be tackled either now or in the future.”

A Department of Health and Social Care spokesperson told Sky News: “The pandemic has put enormous pressures on the NHS but we are committed to supporting hardworking staff to ensure people get the treatment they need.

“We have provided an additional £5.9bn to help tackle the backlogs and we are investing £36bn over three years which will help deliver an extra nine million checks, scans and operations for patients.