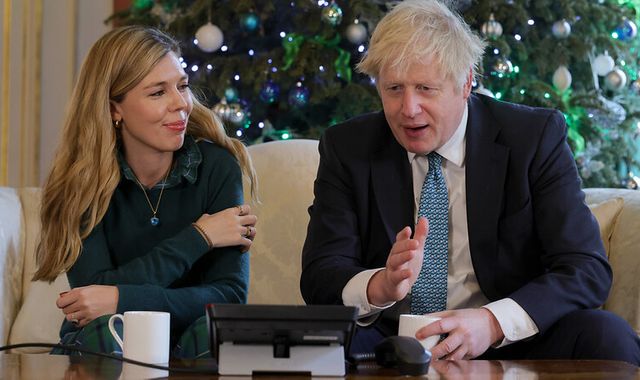 Boris Johnson has offered a “humble and sincere apology” for failing to disclose WhatsApp messages with a Tory peer in which he discussed the controversial funding of his Downing Street flat refurbishment – and blamed getting a new phone for not declaring the conversation.

In a series of letters between the prime minister and his independent adviser on ministers’ interests, Lord Geidt, it has been revealed that Mr Johnson cited “security issues” for him having not previously shared the messages.

In April last year, it emerged that Mr Johnson’s personal mobile phone number had been freely available on the internet for the past 15 years, which prompted a security scare.

The WhatsApp messages about the Downing Street revamp – between the prime minister and Conservative donor Lord Brownlow – were only revealed by an Electoral Commission investigation into the flat row, and were not disclosed to Lord Geidt’s own probe into the matter.

Lord Geidt has now expressed his “grave concern” that he was not made aware of the exchanges either during or after his investigation.

In the WhatsApp messages, from November 2020, the prime minister described the current state of his Downing Street residence as “a bit of a tip” and said he was keen to get interior designer Lulu Lytle to “get on” with the renovation.

In response, Lord Brownlow – who was planning to set up a trust to fund the Downing Street refurbishment, but ended up initially paying the costs himself – told Mr Johnson he would “get it sorted ASAP”.

He added: “Approval is a doddle as it’s only me and I know where the £ will come from, so as soon as Lulu calls we can crack on.”

The multimillionaire has since been revealed to have provided £112,500 for the revamp of the flat above Number 11 – speculated to have included £840-a-roll gold wallpaper – that the prime minister shares with his wife Carrie.

In the messages, Mr Johnson also referred to Lord Brownlow’s ambition for a new “Great Exhibition”.

Prior to the conclusion of the Electoral Commission investigation, which led to the revelation of the WhatsApp messages, Lord Geidt had himself cleared the prime minister of having breached ministerial rules with regards to the renovation of his Downing Street flat.

In his report, the crossbench peer – who was previously the Queen’s private secretary – said the prime minister told him he did not know how the refurbishment was being paid for until late February 2021.

Now, in the letters between himself and Mr Johnson published on Thursday, Lord Geidt expressed his anger that he was not made aware of the November 2020 messages when he investigated the matter; and which therefore left his report to be contradicted by the Electoral Commission’s findings.

He wrote to Mr Johnson that it was “of grave concern” that no attempt was made to retrieve the messages even after his report was published in June last year and when “the device was again accessed for another purpose”.

Lord Geidt told the prime minister that this provided “evidence of insufficient care for the role of your independent adviser”.

He also said that, had he been aware of the messages, he would have questioned the prime minister further on his knowledge of how the refurbishment was being funded and his understanding of the role of Lord Brownlow.

But Lord Geidt added it “does not undermine my finding that the prime minister had assumed that the trust” of which Lord Brownlow was to be chair, and not Lord Brownlow personally, was covering the costs.

And he concluded that the revelation of the messages did not alter his “fundamental assessment” that Mr Johnson did not breach ministerial rules in the funding of his flat refurbishment.

In his response to Lord Geidt, from 21 December, the prime minister wrote: “I am sorry that the office of independent adviser has been put in this position and can only repeat the humble and sincere apology I gave when we discussed this matter earlier today.”

He added: “You appreciate the security issues faced at the time meant that I did not have access to my previous device and did not recall the message exchange.”

However, some have questioned why the WhatsApp messages would have been unable to be found if the prime minister had changed his personal phone number amid security concerns.

WhatsApp offers advice on how chat history can be preserved even if changing a phone number, or when using a new device.

Labour’s deputy leader Angela Rayner accused Mr Johnson of having “little regard for the rules or the truth”.

“The ministerial code requires ministers to act with transparency and honesty,” she said.

“It is simply impossible to read these exchanges and conclude that the prime minister has not breached these aspects of the code.

“Once again, by attempting to hide the truth, Boris Johnson undermines his own office.

“The prime minister’s pathetic excuses will fool no one, and this is just the latest in a long line of sorry episodes.

“This matters because it matters who has influence on our government in a democracy.

“The British public can’t WhatsApp a wealthy donor to open their wallets on request, and the least they deserve is transparency about who’s bankrolling their prime minister.”

Liberal Democrat chief whip Wendy Chamberlain branded the revelations “just another day in the Number 10 circus act and the latest chapter in the Conservative sleaze schandal”.

“Boris Johnson’s excuse for the non-disclosure of WhatsApp messages – because he had a new phone – is akin to the dog eating your homework,” she added.

So who funded the PM’s flat revamp?

Following the furore over the flat refurbishment, Lytle’s company Soane Britain refunded the Cabinet Office who, in turn, refunded the Conservative Party.

The Conservative Party had provided a “bridging loan” of £52,802 to the Cabinet Office for the works, before being reimbursed by Lord Brownlow.

The Conservative Party were last month fined £17,800 by the Electoral Commission for “serious failings” in neglecting to accurately report Lord Brownlow’s donation of £52,802.

Mr Johnson has since personally paid for the costs of the renovation, which is speculated to have included £840-a-roll gold wallpaper.