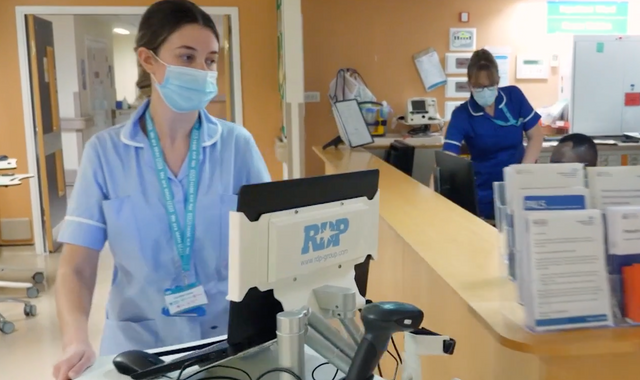 Staff shortages because of COVID infections or isolation are driving the current crisis in the NHS.

And the emergency has been exacerbated by the record surge in COVID infections.

It is not just the rising numbers of patients being admitted but the difficulty in trying to manage bed capacity.

One NHS Trust leader told me his hospital still had beds available but that these could not be given to non-COVID patients as every other patient on the same ward had tested positive.

He also said staff shortages had become so bad over Christmas and into the New Year that he was sending his staff home for a short break between shifts and asking them to return for a double shift to cover absent colleagues.

Hospital capacity is also being impacted by COVID outbreaks in care homes. Patients who might have been discharged into a community setting are having to stay longer in hospital.

The pressure is unrelenting and unsustainable. At least 12 NHS Trusts have declared a critical incident and 17 hospitals across Greater Manchester are pausing non-urgent care.

This is a devastating blow to long-suffering and long-waiting patients, and also to the healthcare staff.

Nobody wants this to happen. The only, very small, consolation is that some hospitals plan fewer non-urgent surgeries and procedures through the winter to help them better cope with seasonal pressure.

Trusts will only declare a critical incident as a last resort. It means their hospitals are unable to function normally without compromising patient safety. A critical incident can be called at any time and there is no fixed duration.

People who test positive on lateral flow tests won’t need follow-up PCR, govt to announce – as ‘around a million’ isolating

Over the peak of the pandemic, some Trusts were reporting critical incidents for less than 24 hours before de-escalating.

It sends a message to partner health agencies, primary care networks and Ambulance Trusts, that the hospital at that particular time is struggling to cope. The situation remains fluid and can change at any time.

Another Trust leader told me the timing of the decision was important. If the critical incident is declared in the late afternoon or evening that means it is more serious as it impacts emergency admissions, which are busier in the evenings and at night.

The prime minister is fond of his combat metaphors and his latest one describes the NHS as being on a “war footing”. Exhausted frontline staff will agree with the battle analogy. They have been fighting for over two years.