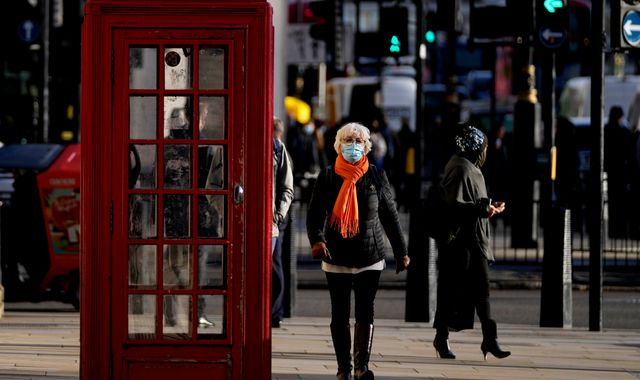 MPs are returning to Westminster after their Christmas break and plunging straight into a potentially fiery Prime Minister’s Questions and a Commons showdown over COVID-19.

Besides the latest crisis over Omicron, Boris Johnson and Labour’s deputy leader Angela Rayner – standing in for Keir Starmer who has tested positive for COVID – are poised to clash over soaring energy bills, investigations into Downing Street parties, and the PM’s flat makeover.

And immediately after the leaders’ first confrontation of the New Year, the PM will face a lengthy and tough interrogation from MPs on the government’s latest COVID strategy.

MPs will want to challenge Mr Johnson on NHS staff absences, the controversial issue of masks in schools, shortages of COVID test kits, and demands from doctors and health chiefs for tougher curbs.

Before the drama unfolds in the Commons, the prime minister will hold the first cabinet meeting of 2022, with escalating Omicron infections and staff absences due to COVID dominating the agenda.

Mr Johnson is desperate to avoid a cabinet split – and has announced that he is rejecting calls to abandon Plan B COVID restrictions in England and introduce further lockdown measures.

“As our NHS moves to a war footing, I will be recommending to cabinet that we continue with Plan B,” Mr Johnson declared at his latest Downing Street news conference.

And sounding an upbeat note despite a record 218,724 cases in England and Scotland, he said: “We have a chance to ride out this Omicron wave without shutting down our country once again.

“We can keep our schools and our businesses open, and we can find a way to live with this virus.”

Backing for the PM ahead of the cabinet meeting came from Wales Secretary Simon Hart, who tweeted: “The cabinet decision to not shut down the economy (again) just before Christmas took nerve.

“As well as economic factors we gave significant weight to mental health & behavioural implications of further restrictions. These decisions are always matters of very delicate judgment.”

“There are serious pressures on the NHS,” he said. “The prime minister has got to be honest with the country about those pressures and even more importantly set out how he plans to address them.”

To tackle staff shortages, the PM has announced that 100,000 critical workers will be given daily lateral flow tests to help keep essential services open. Firms working in food processing, transport, and the UK Border Force are to be sent kits every working day from the start of next week.

But the TUC’s general secretary Frances O’Grady claims that 10.6 million people – 33% of the total workforce – are key workers under the government’s own definition.

“This scheme will only reach one in every 100 key workers,” she said. “It’s hopelessly inadequate.”

In another move, Sky News understands that millions who test positive on lateral flow devices will soon be told they do not need to take follow-up PCR tests, which delay the official start of isolation for hundreds of thousands of people.

Health officials have drawn up plans to limit PCR tests to those with symptoms, allowing those who are asymptomatic – about 40% of cases – to return to work more quickly.

It is understood the move could be announced in the coming days.

A UK Health Security Agency spokesperson told Sky News: “We keep everything under review and any announcement will be made in the normal way.”

In the Commons, Mr Johnson is likely to be challenged on the growing number of NHS trusts – now up to 12, Sky News understands – claiming their staff absences have reached critical levels and some treatments are being suspended.

In the latest development, 17 major hospitals in Greater Manchester are pausing some non-urgent surgery and appointments due to COVID, though cancer and urgent care including cardiac surgery, vascular surgery, and transplants will continue.

NHS bosses say the action is the result of the high and rising level of staff absence – with around 15% off, either ill with COVID or isolating – as well as outbreaks in care homes, which is affecting how people are discharged from hospital.

“This has been a very difficult decision and not one that we have taken lightly,” said Fiona Noden, chief executive of Bolton NHS Foundation Trust, co-chair of Greater Manchester Hospital Gold command and lead for elective care in the region.

“But we’ve done it so we can keep people safe, can maintain the very best infection control measures, can make sure we deploy staff to where they’re needed most and can keep looking after people who need urgent and emergency care, including cancer treatment.”

Challenge over cost of living rise

Besides COVID issues, the Labour leader is likely to challenge Mr Johnson at PMQs on the rising cost of living and taunt him on a claim he made during the 2016 Brexit campaign that fuel bills would be lower if Britain left the EU.

Challenged on the claim during his Downing Street news conference, the PM said: “It’s slightly paradoxical that this is now being campaigned for by people who actually wanted to remain in the EU and still do when it would be impossible to deliver within the EU.

“I’m not ruling out further measures. The argument is that it’s a bit of a blunt instrument. And the difficulty is that you end up also cutting fuel bills for a lot of people who perhaps don’t need the support in quite the direct way that we need to give it.”

Labour’s shadow chancellor Rachel Reeves hit back: “Boris Johnson promised not once but three times to cut VAT on household energy bills during and after the Brexit referendum campaign.

“Yet now he’s happy to go back on his word and is trying to muddy the waters on a change that would help ease the burden on households facing soaring energy bills.”