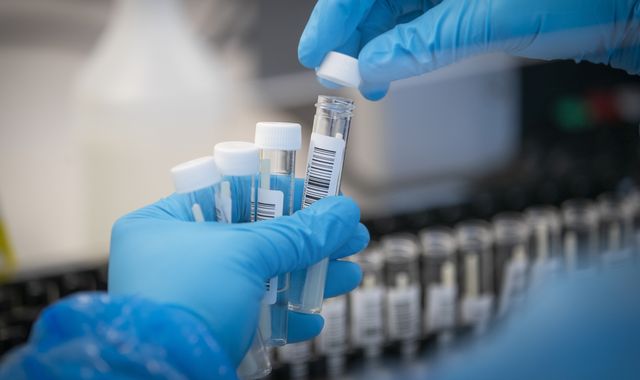 People in England who test positive on lateral flows will no longer need a follow-up PCR to begin their isolation period if they do not have symptoms, the UK Health Security Agency has confirmed.

The change, which will take effect from 11 January, comes after a minister told Sky News that “around a million people” are currently isolating as a result of COVID-19.

People experiencing the three official COVID symptoms – a high temperature, a new, continuous cough and a loss or change to your sense of smell or taste – will still be expected to get a PCR.

But the UKHSA said that those who test positive on lateral flow devices but do not have these symptoms do not need to take follow-up PCR tests.

The move would allow those who are asymptomatic – about 40% of cases – to return to work more quickly.

Similar systems will be introduced in Wales and Scotland.

‘Vast majority’ can be confident a positive lateral flow is accurate

According to the UKHSA, it is a temporary measure while rates of the virus remain high across the UK and will free up capacity in laboratories for PCR tests for those who do have symptoms.

People who test positive on lateral flows will still need to isolate for at least seven days, and register their positive results.

Officials said that while rates remain high, the “vast majority” of people who get a positive lateral flow result can be confident they have COVID.

UKHSA chief executive Dr Jenny Harries said: “While cases of COVID continue to rise, this tried and tested approach means that LFDs can be used confidently to indicate COVID-19 infection without the need for PCR confirmation.

“It remains really important that anyone who experiences COVID-19 symptoms self-isolates immediately. They should also order a PCR test on gov.uk, or by phoning 119.”

But Lib Dem MP Layla Moran, chair of the all-party parliamentary group on coronavirus, warned the “risk of this change is that we could miss new variants that may be more deadly, infectious or resistant to vaccines”.

Speaking to Sky News earlier, health minister Gillian Keegan said that while the government doesn’t collect data on people self-isolating on a daily basis, “it’s obvious if you look at how many people tested positive yesterday, about 215,000, that they’ll all be self-isolating and obviously from the previous days”.

“So it’s about a million people probably are self-isolating right now,” she said.

Record numbers of daily cases have been reported recently, as the more transmissible Omicron variant of the COVID-19 continues to spread, with reports of staff shortages in the NHS and different sectors of the economy.

At the moment, people without symptoms who test positive on a lateral flow are asked to take a PCR test and to only begin their isolation period when they get the second result.

This effectively requires them to isolate for longer than seven days, especially if there are delays in getting the PCR result.

Meanwhile, ministers are also expected to announce that pre-departure testing will no longer be required for travellers returning to the UK.

“We cannot continue to shut down entire workforces and our economies for the benefit of unvaccinated people,” he said.

Mr Walker added: “We need to, as quickly as we can, get to a world where people stay at home if they feel ill, like they do when they have flu, and return to work when they feel better… ultimately we need to get rid of the isolation period altogether.”