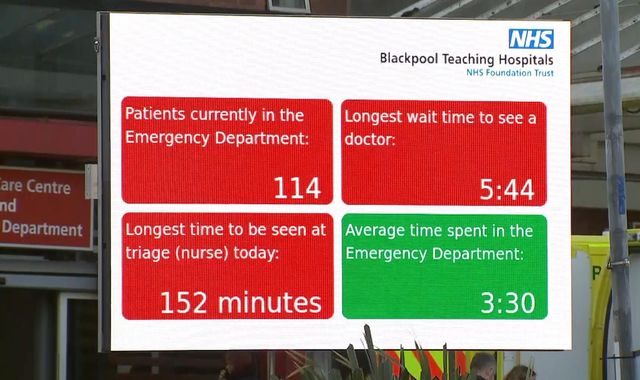 Seventeen hospitals in Greater Manchester have paused some non-urgent surgery and appointments after coronavirus cases have “risen sharply” in the region.

The move is a “temporary measure” and will not affect cancer and urgent care – including cardiac surgery, vascular surgery, and transplantation – the Greater Manchester Health and Social Care Partnership said.

It comes as about 15% of staff in the region are off ill with the virus or isolating, while one in five people in some hospitals have COVID-19.

Outbreaks in an increasing number of care homes have also affected how people are discharged from hospital.

A total of 17 hospitals – including Manchester Royal Infirmary, Salford Royal and North Manchester General – have been affected.

Fiona Noden, lead for elective care in the region, said: “This has been a very difficult decision and not one that we have taken lightly, but we’ve done it so we can keep people safe, can maintain the very best infection control measures, can make sure we deploy staff to where they’re needed most and can keep looking after people who need urgent and emergency care, including cancer treatment.

“We would urge anyone with health concerns to continue to come forward for help and treatment in the usual way, using their local emergency department only for serious illnesses or injuries.”

Coronavirus admissions have risen from 126 on 19 December to 359 on 2 January, while inpatient diagnoses have grown from 193 to 738 in the same period.

It comes as multiple hospitals across the country declared critical incidents amid warnings the NHS is “in a state of crisis”.

In a letter to Health Secretary Sajid Javid, the Royal College of Nursing (RCN) said the NHS can “ill afford” the current level of absences as it called for a “more cautious approach” to COVID restrictions in England “without further delay”.

The union, which has more than 465,000 members, also questioned the “confusing and concerning” differences in coronavirus measures across the UK nations.

It said there were “significant concerns” about staffing plans for the new “Nightingale surge hubs”, which will look after people who are not well enough to go home but need minimal supervision during their COVID recovery.

“It is confusing and concerning that the different UK governments have set out their own different rules and regulations in relation to the management of the pandemic,” the RCN said.

“Nursing professionals are questioning the level and nature of the variation between governments.”

NHS staff absences in England due to coronavirus doubled in the two weeks to Boxing Day, the union said.

What are the COVID rules in the UK’s four nations?

On Tuesday, Blackpool and Great Western Hospitals NHS Trusts became the latest to declare critical incidents due to high demand for services and staff shortages.

Chris Hopson, chief executive of NHS Providers, which represents health trusts, told Sky News that absences are having a “massive impact” on the NHS, which is “really struggling in some places”.

Mr Hopson said the health service is currently under “real pressure” as a result of increasing hospital admissions, demand for non-COVID care and staff absences.

But he added there was a “glimmer” of good news in that London will probably emerge from the current wave first.

Speaking to Sky News on Tuesday, vaccines minister Maggie Throup said Plan B measures are “working” but she was unable to confirm how many hospitals have declared critical incidents.

‘We are currently in a state of crisis’

Prime Minister Boris Johnson has warned that the Omicron variant “continues to surge through the country” and pressure on the NHS would last for weeks.

The chief executive of the NHS Confederation, Matthew Taylor, said that “in many parts of the health service, we are currently in a state of crisis”.

“Some hospitals are making urgent calls to exhausted staff to give up rest days and leave to enable them to sustain core services,” he said.

United Lincolnshire Hospitals NHS Trust has declared a critical incident due to “extreme and unprecedented” staff shortages expected to result in “compromised care”.

Some operations and procedures suspended

The chief executive of University Hospitals of Morecambe Bay, Aaron Cummins, also confirmed in a statement that the trust had declared an “internal critical incident” with some non-urgent operations and procedures suspended.

In an internal message from Mr Cummins shared on Twitter, he told staff that “sadly, despite everyone’s best efforts, many of our patients are still receiving a level of care and experience that falls below the level of standards we would like”.

Mr Johnson said he appreciated the pressure NHS staff were under, and that it was “vital that we make sure that we help them by trying to contain the pandemic” by getting vaccinated and following Plan B measures.

And he warned it would be “absolute folly” to say the pandemic is over.

Figures released on Tuesday showed the UK has reported more than 200,000 new COVID cases for the first time.

Share
Facebook
Twitter
Pinterest
WhatsApp
Previous articleJason Derulo gets into fight at Las Vegas club after man calls him Usher
Next articleCOVID-19: ‘Around a million people’ isolating due to coronavirus in UK as testing rules set to be relaxed