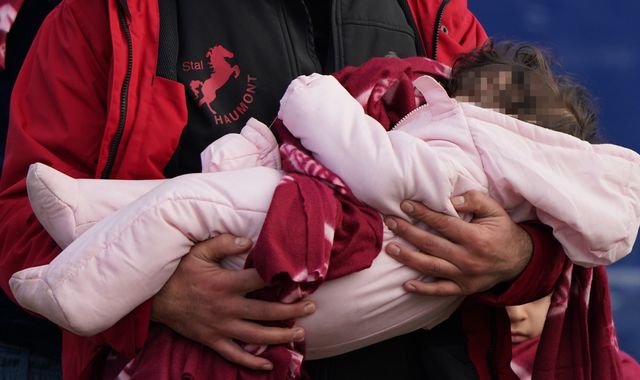 A little girl wrapped up in a pink all-in-one suit and a man carrying her in his arms are believed to be among the first people this year to reach the UK after making the dangerous Channel crossing in small boats.

The pair arrived in the busy port of Dover in Kent aboard an RNLI lifeboat along with other suspected migrants who also made the perilous voyage.

At least 66 people in two vessels crossed the busy Dover Strait from France on Tuesday.

The little girl and man carrying her were seen being escorted up the gangway by immigration officials before being taken off to be processed.

Among the others who arrived in Dover on Tuesday were a man and woman leading a child wrapped in a blanket – possibly a family-of-three.

A number of Border Force and French boats were active in the Channel on Tuesday amid renewed attempts to make the precarious crossing.

It comes after more than 28,300 people crossed the water aboard small boats in 2021, which was an increase of about 20,000 compared with the year before.

Last year’s record number was despite millions of pounds promised by the UK to French authorities to tackle the issue.

The last 12 months have seen smugglers packing more and more people aboard larger and larger dinghies, sometimes with deadly consequences. In November, at least 27 people died when an inflatable boat capsized.

The British government has said people should not be trying to cross the Channel, and instead should be claiming asylum in the first safe country they reach.

Under its New Plan for Immigration, for the first time how someone enters the UK – legally or “illegally” – will have an impact on how their asylum claim progresses and on their status in the UK if that claim is successful.

But arrivals will continue, and more people will drown in the narrow sea between France and Britain, if the UK government pursues its “dangerous and callous policy”, ministers have been warned.

Tim Naor Hilton, chief executive at Refugee Action, said: “People will continue to cross the Channel in flimsy boats, and smugglers will continue to profit, unless ministers open up more routes for refugees to claim asylum here.”

He added: “(In November) we saw the deadly result of their strategy of keeping people out rather than keeping people safe, when at least 27 people died near our coast.

“And yet the government wants to legalise this dangerous and callous policy in its Anti-Refugee Bill, which will only lead to more people drowning. It must wake up and scrap this bill now.”