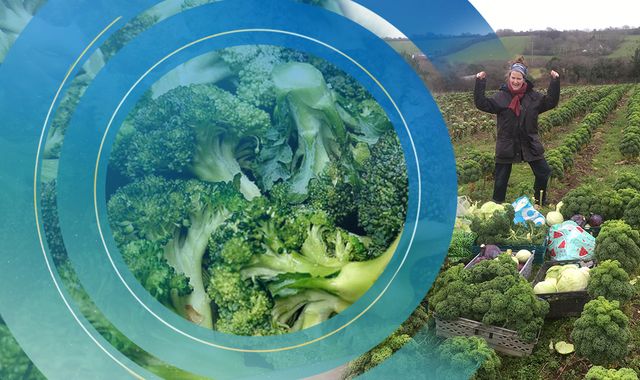 Cornish volunteers are tackling the UK’s food waste problem by rescuing abandoned crops and delivering them to food banks, in a revival of the ancient practice of “gleaning”.

“All food is made of carbon. And also the process of growing it: producing the fertilisers, moving the seeds, planting the seeds, all the diesel costs, making the tractors – all of that is greenhouse gas, and we need to utilize that rather than waste it” she said.

Until the late 18th century, the poor were allowed to glean crops leftover from harvest, before a court case ruled in favour of private property rights.

Today 1.6 million tonnes (3.2%) of all food harvested in the UK is wasted before it leaves the farm, according to waste group WRAP, with much more never being harvested at all. Meanwhile, about five million people live in food poverty.

According to Sheffield University research, 13% of people are struggling to access food or are hungry in Cornwall.

The size of fruit and vegetables is “usually the issue” said Whitelaw, whose team have scooped up potatoes deemed too big to be crisps or cauliflowers rejected by a supermarket because they wouldn’t fit six per crate.

But they also collect gluts of vegetables like courgettes and beetroots that kept on growing once farmers had fulfilled their orders, but couldn’t afford to have picked.

Whitelaw started in February 2021 by collecting vegetables in her car after receiving National Lottery funding, along with other groups around England.

Now the project uses several lorries and coordinates almost 150 volunteers, but needs more farmers to sign up to meet demand.