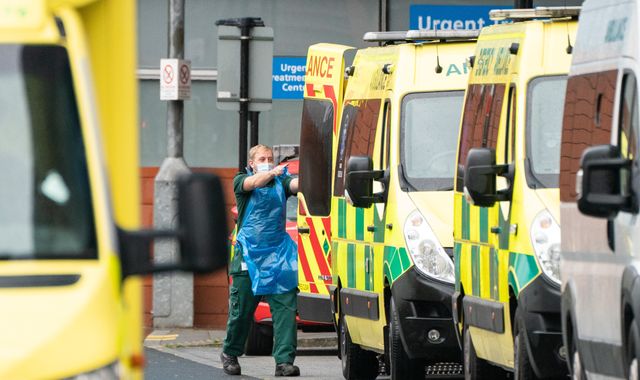 An ambulance service in the northeast of England is still asking patients suffering from suspected strokes or heart attacks to get a lift to hospital due to pressures on staff from coronavirus and the new year.

The North East Ambulance Service (NEAS) said the measures were implemented because people who should have had a crew arrive within 18 minutes were waiting for an hour on average.

Dr Mathew Beattie, its medical director, said the service was dealing with increased demand over the new year in addition to staff sickness linked to the Omicron variant.

While the service would usually move up and down an escalation plan as demand for crews increased or decreased, a decision was taken on New Year’s Eve to go straight to its highest level.

This included alerting patients on calls that were “not potentially life-threatening”, and when there was a delay for an ambulance, that they could make an informed choice about whether it was quicker and safer for them for a relative or friend to take them to hospital rather than wait, the NEAS said.

Dr Beattie added: “Under normal circumstances, we would move up and down our clinical escalation levels reactively as each point is triggered or demand reduces.

“The measures we took over the bank holiday weekend were implemented because we have seen activity fluctuating dramatically with surges in demand.

“This was an incredibly difficult decision to take, but when patients are waiting an average of an hour for an ambulance that should be responding within 18 minutes, there is a risk for them coming to harm if they cannot get to hospital quickly.”

He added that no patient harm had been identified as a result of the decision.

After a review on Tuesday, the NEAS has returned to using its regular escalation plan.

Dr Beattie said: “Our performance has not returned to normal and it is still taking us too long to get an ambulance to patients, unfortunately due to this patients remain at risk, which is unacceptable.

“Where it is safe we will continue to ask patients to make their own way to hospital, however we would never ask anyone to drive themselves to hospital with a life-threatening illness.”

The health minister has said she will ask NHS England to look into the situation.

Gillian Keegan told Sky News: “That is not what we have put in place at all.

“We have more ambulance crews in operation than we have ever had, we also gave £55 million extra just for this period to cover staff and make sure we had increases in staff and staffing levels.

“I’ve actually asked NHS England to look at that particular case because that doesn’t sound to me like that’s an acceptable approach.

“People should be able to get an ambulance if they have a heart attack and that’s why we’ve put that extra funding in place, and why we’ve been building up our ambulance service over the last couple of years.”