UK weather: Fresh warning for snow and ice in Scotland and northern England on Friday as wintry conditions set to continue 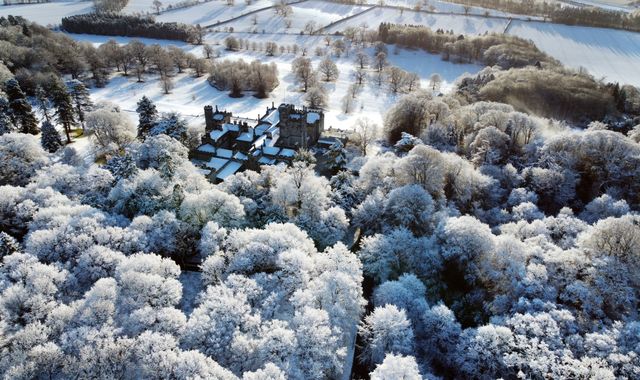 A fresh yellow weather warning for widespread snow and ice across parts of the UK has been issued for Friday, as wintry conditions look set to continue.

It also warned of icy patches on some untreated roads and pavements, a risk of lightning strikes and possible brief power outages.

It comes as parts of the UK were alerted to localised blizzard conditions, winds of up to 80mph and a yellow ice warning on Tuesday.

The Met Office issued a yellow ice warning for most of northern England, running from 2am to 11am on Tuesday.

Icy conditions and potentially heavy snows are possible from midnight on Tuesday until lunchtime on Thursday, forecasters said.

There are also snow, ice and wind warnings in parts of northern Scotland.

It follows what the Met Office described as “an exceptionally mild spell” that saw the warmest New Year’s Day in the UK since records began.

In England, the colder temperatures might bring snow over the Pennines and North York Moors, but it will be “pretty wet stuff”, forecaster Simon Partridge added.

However, in Aberdeenshire and northern and eastern Scotland, winds of up to 80mph could create “localised blizzard conditions”, with the Met Office issuing warnings of snow and ice for travellers.

During the day, the west of the country is likely to be “dry and bright” as the winds drop, with few showers, but Thursday will see a “band of rain” move in, with icy temperatures overnight, Mr Partridge said.

Towns in the south could face temperatures of -4C (25F) on Thursday morning.

Agostinho Sousa, a consultant in public health medicine at UKHSA, warned that cold weather can have a “serious impact on health, particularly for older people and those with heart and lung problems” as he urged people to check in with older neighbours as temperatures fall.

“It’s important to check on those who are more vulnerable to cold weather, including older neighbours or relatives – especially those living alone or those who have a serious illness,” he said.

The call to keep homes heated comes as energy bills continue to rocket, something which has been described as a “nationwide crisis” that has led several suppliers to collapse.

UKHSA said that for people struggling to afford heating bills, Simple Energy Advice provides “free advice on energy efficiency and national grants that are available to help keep you warm this winter”.

It added: “If people can’t heat all the rooms they use, it’s important to heat the living room during the day and the bedroom just before going to sleep.

“Wearing a few thin layers is better at trapping heat than wearing one thick layer. Having plenty of hot food and drinks is also effective for keeping warm.”

Share
Facebook
Twitter
Pinterest
WhatsApp
Previous articleKatie Price says she will have therapy ‘forever’ to deal with ‘traumatic events’ that led to drink-drive crash
Next articleBoris Johnson has not ‘earned the right’ for a knighthood once he leaves office, Labour leader Sir Keir Starmer says