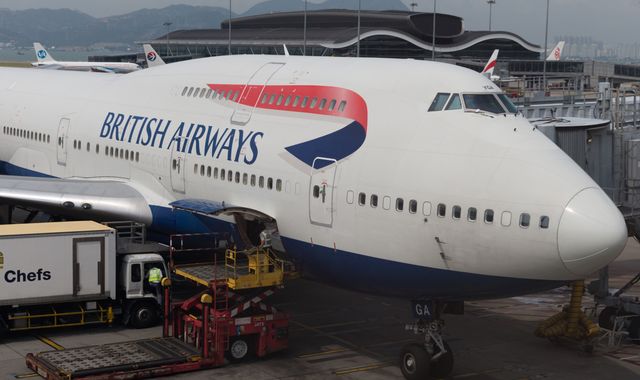 Travel stocks have helped London’s stock market start the year on a high amid signs that the Omicron variant does not cause such serious illness as other incarnations of COVID-19.

The FTSE 100 climbed by as much as 100 points in early trading, hitting levels last seen in February 2020 before shares were hit by a steep slump as the pandemic advanced globally.

It followed a rally seen across other global indices which opened a day earlier this week, and builds on a 14.3% upturn over the course of 2021 – the FTSE’s best annual performance since 2016

Leading the way on the FTSE 100 was British Airways and Aer Lingus owner International Airlines Group – up 10%.

Optimism has been fuelled by the hopes that restrictions on industries such as travel will not need to be tightened further – and that an economic outlook darkened by the arrival of Omicron at the end of 2021 may see improvement this year.

On Monday, prime minister Boris Johnson acknowledged pressures facing the NHS amid the spread of Omicron but said it was “plainly milder” than other variants and that while current rules would be kept under review the current plan B regime was “the right one”.

Wider hopes for global demand have helped lift the oil price too with Brent crude climbing close to $80 a barrel over recent days, helping boost the likes of Shell and BP.

Some stocks in the hospitality and leisure sectors, which has remained open but hit by consumers staying away amid Omicron fears, were also winners as the markets reopened on Tuesday.

Premier Inn owner Whitbread added 3% while pub chain Fullers added 6% and the Restaurant Group, owner of Wagamama, rose by 2% – with similar rises seen for All Bar One owner Mitchells & Butlers and Young’s, another pub operator.

Cineworld, which has suffered a torrid time during the pandemic, rose 5%.

Banks too were on the front foot, with NatWest, HSBC, Lloyds and Barclays all adding more than 3%.

Among the FTSE 100’s biggest fallers were online grocery retailer Ocado – a company that proved a winner during lockdowns but lost 4% of its value on Tuesday.

Susannah Streeter, senior investment and markets analyst at Hargreaves Lansdown, said: ”The FTSE 100 has set off on a sprint of New Year optimism.

“Stocks reliant on international travel are powering ahead.

“With yet more indications that Omicron, though highly infectious, does not cause such serious illness, a wave of relief is pushing up companies which have been hit by worries about tighter restrictions.

“There is clearly expectation that bookings will have got a rocket boost from hopes that this latest spike of infection will flatten relatively quickly.

“With so many people in the short-term being forced to isolate at home, it’s likely many people will be spending the next few weeks browsing travel blogs for inspiration, given there is so much desperation for a holiday around.”