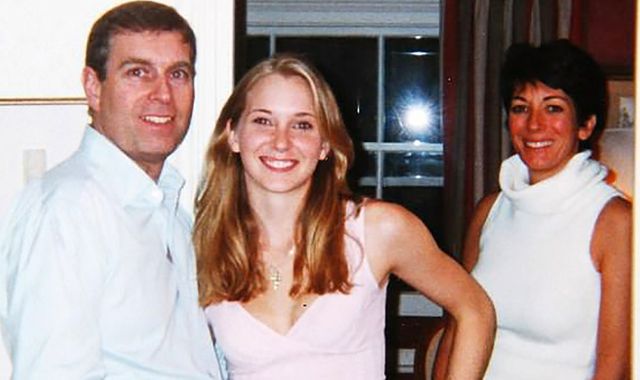 The woman who has accused Prince Andrew of sexual assault agreed not to sue anyone connected to Jeffrey Epstein who could be described as a “potential defendant”, a newly-released document shows.

The 2009 settlement between Virginia Giuffre and disgraced financier Epstein reveals he agreed to pay her $500,000 (£370,000) to end her legal claims against him.

Details of the confidential deal were made public on Monday following an order by US judges.

Who’s who in the Jeffrey Epstein scandal?

Ms Giuffre, formerly known as Virginia Roberts, is suing the Duke of York in a civil lawsuit in which she claims he “committed sexual assault and battery” upon her when she was a teenager.

She alleges that she was trafficked by Epstein to have sex with Andrew when she was aged 17, a minor under US law, and was pictured with the royal and Ghislaine Maxwell during the period the alleged intercourse took place.

Maxwell was last week found guilty of recruiting underage girls to be sexually abused by her ex-boyfriend Epstein, who killed himself in 2019 while awaiting trial on sex trafficking charges.

Andrew, who has not been charged with any criminal offences, has vehemently denied the allegations against him.

Today, a New York judge will hear arguments on whether to dismiss Ms Giuffre’s lawsuit against the duke, which is seeking unspecified damages.

What are the ‘factual allegations’ stated in Virginia Giuffre’s lawsuit?

The original complaint made by Ms Giuffre against Epstein included a section which read: “In addition to being continually exploited to satisfy (the) defendant’s every sexual whim, (the) plaintiff was also required to be sexually exploited by (the) defendant’s adult male peers, including royalty, politicians, academicians, businessmen, and/or other professional and personal acquaintances.”

Andrew’s lawyers will argue the settlement and the wording of this section “releases Prince Andrew and others from any purported liability arising from the claims” that Ms Giuffre has made against the royal.

But Ms Giuffre’s legal team has said her agreement with Epstein is “irrelevant” to her claim against the duke because it applied to people involved in litigation in Florida, which did not include Andrew.

Ms Giuffre’s 2009 settlement reveals she agreed to dismiss her lawsuit against Epstein “upon payment and clearance” of the $500,000.

The document states that this would also “forever discharge… any other person or entity who could have been included as a potential defendant… from all, and all manner of, action and actions of Virginia Roberts, including state or federal…”

It adds that the agreement “represents a final resolution of a disputed claim and is intended to avoid litigation”.

“The settlement agreement shall not be construed to be an admission of liability or fault by any party,” the document says.

Those involved in the settlement had agreed it was “not intended to be used by any other person, nor be admissible in any proceeding or case against or involving Jeffrey Epstein, either civil or criminal”, according to the document.

“The release does not mention Prince Andrew. He did not even know about it.

“He could not have been a ‘potential defendant’ in the settled case against Jeffrey Epstein, both because he was not subject to jurisdiction in Florida and because the Florida case involved federal claims, to which he was not a part.

“The reason we sought to have the release made public was to refute the claims being made about it by Prince Andrew’s PR campaign.”

‘One of Prince Andrew’s better days in court’

Media lawyer Mark Stephens said he believes Ms Giuffre’s lawyers will be “quite worried” by the terms of her agreement with Epstein in relation to her case against Andrew.

He told Sky News: “On the face of it, it looks like there is a release for Prince Andrew.

“I confidently expect the lawyers for Virginia Giuffre to say that’s only in relation to the case in Florida, but actually when you read the full document, it clearly isn’t.

“It’s a release worldwide over any allegations so would, I think, in a fair hearing release Prince Andrew.”

He said the document “really does scream out” and Ms Giuffre has a “long row to hoe on this”.

“I think this is one of Prince Andrew’s better days in court,” he added.

“I think this is probably his best chance of getting out but I suspect it’s not before an appeal.”

If judges do not throw out Ms Giuffre’s lawsuit against Andrew this week, a trial could be held between September and December 2022.