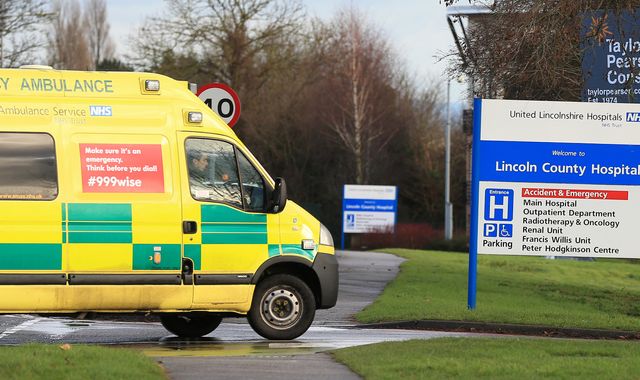 Multiple hospitals have declared critical incidents amid warnings the NHS is “in a state of crisis” in the face of staff shortages caused by coronavirus and rising pressures.

In a letter to Health Secretary Sajid Javid, the Royal College of Nursing (RCN) said the NHS can “ill afford” the current level of absences as it called for a “more cautious approach” to COVID restrictions in England “without further delay”.

The union, which has more than 465,000 members, also questioned the “confusing and concerning” differences in coronavirus measures in the different UK nations.

It said there were “significant concerns” about staffing plans for the new “Nightingale surge hubs”, which will look after people who are not well enough to go home but need minimal supervision during their COVID recovery.

“It is confusing and concerning that the different UK governments have set out their own different rules and regulations in relation to the management of the pandemic,” the RCN said.

“Nursing professionals are questioning the level and nature of the variation between governments.”

The RCN urged ministers to introduce “a more cautious approach for England without further delay”, saying this was supported by “high levels of staff absence due to COVID-19”.

NHS staff absences in England due to coronavirus doubled in the two weeks to Boxing Day, the union said.

What are the COVID rules in the UK’s four nations?

Absences are having a “massive impact” on the NHS, which is “really struggling in some places”, he said.

And on Tuesday, Blackpool and Great Western Hospitals NHS Trusts became the latest to declare critical incidents due to high demand for services and staff shortages.

Natalie Hudson, chief operating officer at Blackpool Teaching Hospitals NHS Foundation Trust, said: “Because of the pressures the trust is under, we have made the decision to declare an internal critical incident which means staff across the trust will be working together today to take actions immediately to attempt to alleviate the pressure we are under including stepping down some non-urgent activity in order to deliver all of the things we can and need to do to provide the very best care possible.”

Kevin McNamara, chief executive of Great Western Hospitals NHS Foundation Trust in Swindon, tweeted: “Following a tough few days we have this morning declared an Internal Critical Incident due to sustained high levels of demand (Covid & Non-Covid) & availability of beds. This is causing delays to pts accessing services for which I am very sorry.”

Mr Hopson said the health service is currently under “real pressure” as a result of increasing hospital admissions, demand for non-COVID care and staff absences.

But he added there was a “glimmer” of good news in that London will probably emerge from the current wave first, with hospital admissions dropping to one to three percent in the last three days in the capital.

Plan B measures ‘are working’

Also speaking to Sky News on Tuesday, vaccines minister Maggie Throup said plan B measures are “working” and “I don’t see no reason why we need to change”.

She was unable to confirm how many hospitals have declared critical incidents and also how many people across the country were isolating due to COVID.

“At the moment, if you look at the people who have been hospitalised, they are going in with less severe conditions than before,” she said.

“The numbers that are in hospital beds is about half what it was a year ago – and that just shows the power of the vaccine.”

‘We are currently in a state of crisis’

Prime Minister Boris Johnson has warned that the Omicron variant “continues to surge through the country” and pressure on the NHS would last for weeks.

But cracks were already beginning to show as six NHS trusts had reportedly declared “critical incidents” – where bosses are concerned they may not be able to provide priority services – on Monday evening.

The chief executive of the NHS Confederation, Matthew Taylor, said that “in many parts of the health service, we are currently in a state of crisis”.

“Some hospitals are making urgent calls to exhausted staff to give up rest days and leave to enable them to sustain core services,” he said.

One of the hospitals to declare a critical incident was United Lincolnshire Hospitals NHS Trust, where “extreme and unprecedented” staff shortages were expected to result in “compromised care”.

Some operations and procedures suspended

The chief executive of University Hospitals of Morecambe Bay, Aaron Cummins, also confirmed in a statement that the trust had declared an “internal critical incident”.

In an internal message from Mr Cummins shared on Twitter, he told staff that “sadly, despite everyone’s best efforts, many of our patients are still receiving a level of care and experience that falls below the level of standards we would like”.

And he added that some non-urgent operations and procedures would be suspended.

Mr Johnson said he appreciated the pressure NHS staff were under, and that it was “vital that we make sure that we help them by trying to contain the pandemic” by getting vaccinated and following plan B measures.

And he warned it would be “absolute folly” to say the pandemic is over.

In an attempt to stem the spread of Omicron, secondary school pupils in England will be urged to again wear face masks in the classrooms, and need to take twice-weekly tests.

The deaths data only covers England, whilst the number of cases includes Scotland, but not Wales and Northern as they do not report COVID-19 statistics over the bank holiday.