Northern Ireland: Number of people identifying as ‘non-religious’ doubles in a decade 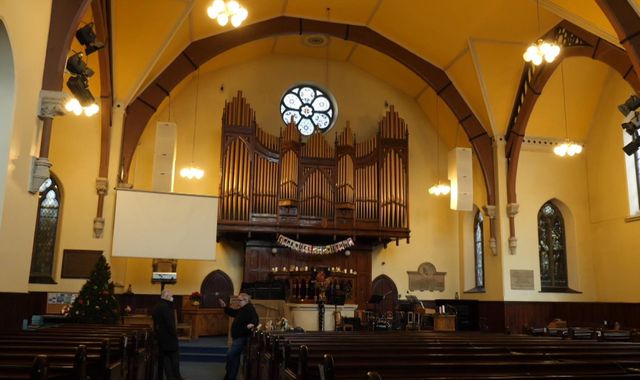 Northern Ireland is synonymous with religion – but there has been a significant increase in the number of people identifying as “non-religious”.

According to the 2021 Northern Ireland Life and Times Survey, 27% of the population now claim to have no religion.

The figure has doubled in a decade and could be electorally significant in a place where religion has influenced politics.

Robbie Norton, 23, is an Irish League footballer with a second passion: Faith. But he does not describe himself as religious.

He said: “For people like me who have that more personal faith, there’s no real box to tick.

“If you say you’re religious, you can probably bet your bottom dollar the next question’s going to be are you a Protestant or a Catholic?

“That’s happened to me in the football changing room a number of times and my answer would be I’m neither, I’m a follower of Jesus,” he added.

She said: “We’ve been much more liberal about identity in some senses. We carry this very strong identity on one side and then this liberal attitude towards it on the other.

“I can identify as Irish, Northern Irish, British, Ulster, whatever I want to identify as and that gives me a certain freedom about how I express myself to other people.”

He said: “We have some questions to ask as the church. I’m not sure the Jesus PR has been very good since the second or third century.

“There’s lots of stuff in the news that would suggest that the church isn’t particularly a great place to go.”

“Maybe when we get rid of religion as some sort of monolithic wall, you can start asking the spiritual questions,” he added.

Separation of religion and politics

The Roman Catholic Church and the Presbyterian Church, the largest Protestant denomination, no longer hold the same sway.

There is a growing gulf between the fundamentalist Free Presbyterian Church and the Democratic Unionist Party, both founded by Rev Ian Paisley.

It is a separation of religion and politics that has the potential to influence the outcome of the 2022 Stormont election.