COVID-19: Concern as number of over-50s in hospital rises – but ‘data does not support more restrictions’ 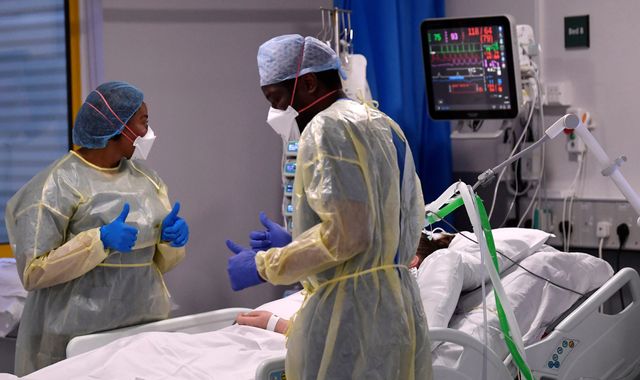 Ministers are “concerned” that the number of over-50s being admitted to hospital with COVID is rising, the education secretary has said.

Despite the increase, Nadhim Zahawi became the second minister in two days to tell Sky News that coronavirus data does not currently suggest further restrictions are needed in England this week ahead of a review on measures on Wednesday.

He said all hospitals outside London are now coming under “significant pressure” but those in the capital are seeing a significant drop in admissions.

On Sunday evening a hospital trust in Lincolnshire declared a critical incident because of “significant staffing pressures due to absence related to COVID-19”.

Rise in over-50s in hospital with COVID

Mr Zahawi told Sky News that hospital numbers would continue to be monitored: “The numbers of people in hospital with coronavirus have begun to rise in the over-50s, which we are concerned about, but on the whole, actually the number of people in ICU [intensive care] has come down, which is good news.”

He added: “If we see more leakage of infection in the over-50s – because most of the surge in infections from the Omicron variant has been in the under-50s – then that is more likely that those people end up with severe infection and hospitalisation.

“But the good news is obviously that 90% of those people over 50 have had the booster jab – that is the real protection against severe infection and hospitalisation.

“So, at the moment there’s nothing in the data to suggest we need to go further but of course, we will look at the Wednesday review and then beyond that keep monitoring the data very carefully.”

The latest data publicly available from the Office for National Statistics (ONS), released on 31 December, shows hospital admission rates increased in people aged 75 years and over and those aged 15-24, but decreased or remained similar in all other age groups, in the week up to 19 December.

Data for the public is normally released on Fridays and covers the week beforehand, but Mr Zahawi said he sees the daily figures.

Explainer: Why cutting self-isolation to five days would be ‘counter-productive’

The latest ONS COVID infection survey data shows that on 20 December, people over 50 were less likely to test positive for COVID in household settings compared with younger age groups.

Increasing pressure on all hospitals but slight optimism in London

Chris Hopson, chief executive of NHS Providers, said it is clear hospitals outside London are now experiencing the “significant pressure” those in London have been, with a 10-day lag.

He said the latest daily data shows that over the past seven days there has been a 75% increase in patients with COVID-19 in hospital, with the North East and Yorkshire seeing the largest rise of 119%; the South West has seen the smallest rise, with 37%.

Mr Hopson said London COVID hospital admissions are very important as they indicate how the rest of the country will look.

He said the last two days’ London admissions data are “more encouraging” as the growth rate has “dropped significantly”, with just a 2% rise on 2 January compared with 15% on 28 December.

London hospitals “should be able to cope this week”, he said, although “coping under-plays the degree of pressure trusts and their frontline staff are under”, with many trusts having to delay planned care cases.

And he warned a “very close eye” will need to be kept on the effect on London from New Year celebrations and schools returning this week.

Omicron has different pattern to Delta

Mr Zahawi added that Omicron is producing a different pattern to Delta in terms of people needing ventilators and time spent in intensive care.

He said: “On the whole, we are not seeing the same pattern as with Delta, where we had much greater numbers of people on ventilators.

“And there seems to be a shorter period of time with people in ICU as well, and those who are being admitted with COVID rather than for COVID is also about a third of that number.”

The latest data shows a further 137,583 new COVID cases and 73 coronavirus-related deaths were reported in England and Wales yesterday.

That is a drop from the previous day’s record number of daily cases at 162,572 in England alone.