COVID-19: Bins ‘overflowing’ with waste in parts of England due to coronavirus staff shortages 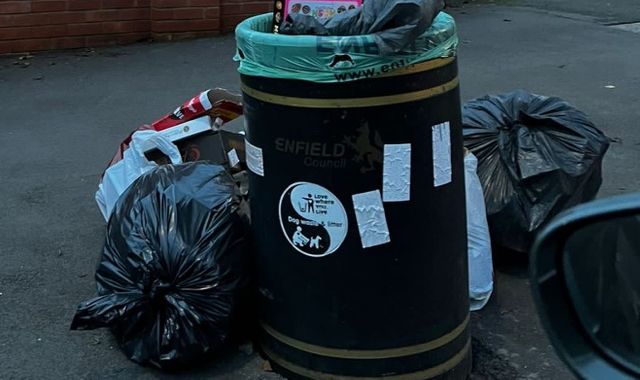 Bins are “overflowing” with waste in parts of England as COVID-related staff shortages have resulted in “terrible” delays to collections, local politicians have warned.

Councillors in London, Gloucestershire, Somerset and Buckinghamshire say bin collection services have been scaled back as workers with the virus isolate.

Chelmsford City Council in Essex confirmed 23 members of staff were absent and it had cancelled three days’ worth of food waste collections.

North Somerset Council said it had been unable to pick up 1,000 recycling bins on New Year’s Eve as crews remain “stretched due to staff sickness”.

Stephanos Ioannou, a Conservative councillor in Enfield, north London, said the number of complaints about missed bin collections was roughly double the average for this time of year.

He said: “I’ve been driving round my ward and seeing bins overflowing and Christmas trees are left outside.

“Over the Christmas period, usually I get on average 30 emails a week on waste services.

Gloucester has been hit with “terrible problems” as bin collectors work in close-knit teams and quickly pass the virus on to one another, Liberal Democrat councillor Declan Wilson said.

Mr Wilson said recycling collections were stopped altogether over Christmas, caused by a combination of COVID-related absences and driver shortages.

Several London boroughs have announced there may be future delays to services, with Haringey Council warning the “uniquely challenging times” had impacted its workforce.

Newham Council has temporarily suspended the collection of bulky waste items due to “higher than normal levels of staff absence”.

And green food and garden recycling bin collections have been cancelled “until further notice” by Manchester City Council due to the number of staff in isolation.

Meanwhile Birmingham City Council apologised for missed collections over the festive period, saying crews had been affected by COVID in the week leading up to 30 December.

The Local Government Association (LGA), which represents councils across England, said crews have been badly impacted by the spread of the Omicron variant and called for workers be prioritised for COVID tests.

An LGA spokesman said: “As cases of COVID-19 rise in light of the Omicron variant, councils are concerned that these existing staffing issues may get worse.”