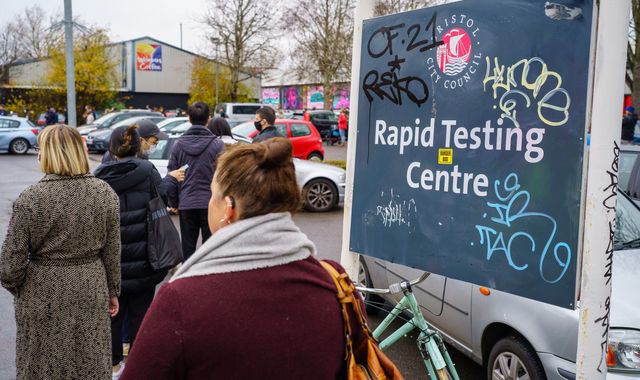 A further 157,758 coronavirus cases and 42 COVID-related deaths have been recorded in the latest 24-hour period, official figures show.

The deaths data only covers England, whilst the number of cases includes Scotland, but not Wales and Northern Ireland as they do not report COVID-19 statistics over the Bank Holiday.

The number of new infections reported in England stood at 123,547 on Sunday. There were also 59 deaths within 28 days of a positive COVID test.

According to the government dashboard there were 42 deaths reported in England today following 73 reported yesterday, and 143 reported last Monday.

Data for Wales and Northern Ireland will be updated after the holidays, according to the government dashboard.

A total of 51,800,798 first doses of a COVID vaccine had been delivered in the UK by Sunday, the figures show.

That was an increase of 12,121 on the previous day, but does not include data from Wales.

Ministers have claimed there is “no evidence” for bringing in further restrictions in England, with Prime Minister Boris Johnson telling broadcasters on Monday that Plan B measures are the “right path” for the country.

But NHS leaders have warned of an “intensifying health crisis” in hospitals, with several, including four in Lincolnshire, declaring critical incidents to help with staff shortages caused by COVID sickness.