Sporting predictions for 2022: World Cups, Winter Olympics and the rise of Raducanu 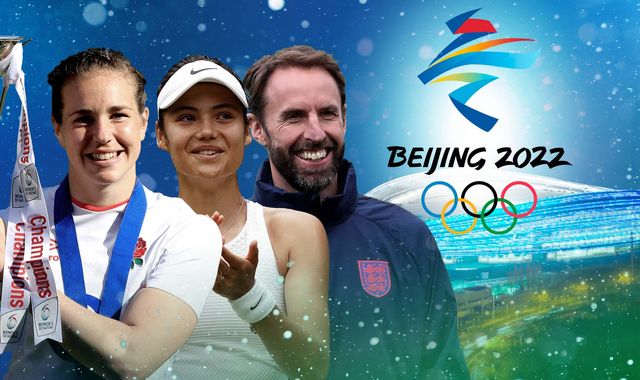 Off the back of a year that brought us the 2020 Olympics in 2021 and a British 18-year-old following up her A-Levels by winning the US Open tennis, only a fool would make predictions for 2022.

In terms of the biggest global events, the year begins with the Winter Olympics and ends with the men’s football World Cup.

Given they take place in Beijing and Qatar respectively, expect the sportspeople to share headlines with politicians.

Team GB brought back a record-equalling five medals from the 2018 Winter Games, and beating that will be tough, especially given the retirements of speed skater Elise Christie and double skeleton champion Lizzy Yarnold.

There are medal prospects in previously profitable events like curling and bobsleigh, but the big stories might come in winter sport’s equivalents of BMX biking which brought success in the Tokyo Summer games.

So watch for the likes of snowboarders Charlotte Bankes and Katie Ormerod.

Extra hankies at the ready if Ormerod fulfils her dream: she fractured her heel on the eve of the opening ceremony in 2018.

Tears of despair have been the norm for British teams at the World Cup for so long. Now, after Gareth Southgate’s England finished their last three tournaments fourth, third and second, optimism abounds for Qatar.

Semi-finals again would be an achievement. Brazil and France feel the likeliest winners in the pre-Christmas desert heat.

Getting there at all would be a triumph for Wales or Scotland, who are on course to meet in the spring playoffs. Wales would be favourites; momentum might just carry Scotland through.

At the women’s Euros in July, England look nailed on to progress on home soil from a group that includes Northern Ireland.

Spain or Germany would probably be the quarter-final opponents. Win that, and we could start checking whether England’s Dutch head coach Sarina Wiegman is eligible to be made a dame.

Coronavirus has its tentacles firmly around the Premier League. Fixtures will pile up. All the more reason to suspect the strength of Pep Guardiola’s squad will take Manchester City to another title.

In Scotland, Celtic’s revival perhaps won’t be enough to stop Rangers winning the Premiership again and quite possibly the Scottish Cup too.

The cricketing year will likely begin with extended Ashes misery in Australia, which is also the venue for the sport’s highest profile event of 2022, the T20 World Cup.

Despite a slight fear that Eoin Morgan’s England might have peaked, they may still go one better than their 2021 semi-final.

Take hosts Australia to retain their trophy, however – and to win the Women’s World Cup in New Zealand in February.

By then we’ll have already seen Emma Raducanu’s first attempt to add a second Grand Slam success to September’s US Open fairytale.

It’s not being churlish, or negative, merely realistic to suggest that winning any further Grand Slam in the next two years would be a significant achievement.

So would retaining her current ranking in the world’s top 20, not to mention keeping her feet on the ground amid the inevitable Wimbledon hype come summer.

And that other quiet, unassuming British sporting champion?

Expect Tyson Fury to be punching (and very likely singing) his way to more success. Boxing politics make it harder to predict who will fight whom when, than to say Fury will carry on making money, friends, enemies and headlines.

Ranked number one in the world are England’s women’s rugby team, heading into October’s World Cup. They could certainly win it, but don’t be surprised if home advantage helps New Zealand to the trophy.

England should win the Women’s Six Nations, despite a French challenge, while the men’s version really is too tight to call. France are favourites but face stiff challenges. If you wanted a bet, Wales might be worth a punt at around 6-1.

The main hope for the Rugby League World Cup in this country is that it actually takes place, after falling victim to COVID in 2021.

Australia are worthy hot favourites, while England would do well to get past New Zealand.

For horse racing, just to get through the year without a major scandal would be something.

Rachel Blackmore cut through the gloom in 2021 as the first woman to ride a Grand National winner, and she may well be a big part of more Irish domination at the Cheltenham Festival in March.

There is talk of Tiger Roll going for an historic third National at Aintree. It would be a surprise if he does, and a bigger one if he turns up and wins again.

Talking of Tiger talk, as it were, golfer Woods has voiced his hopes of competing (or at least teeing off) at the 150th Open Championship at St Andrew’s. With his car crash still less than a year behind him, that sounds decidedly optimistic.

Which brings us to another former world champion.

Can Lewis Hamilton wrest the Formula 1 championship back from Max Verstappen? Does he even want to try?

We head into the New Year with no guarantee from Mercedes that their star driver has the appetite for it; and the momentum seems to be with Verstappen and Red Bull.

However, Hamilton is a true racer, a fighter. If he feels Mercedes have a car that gives him a chance of a record-breaking eighth title, I think he’ll go for it. And get it.