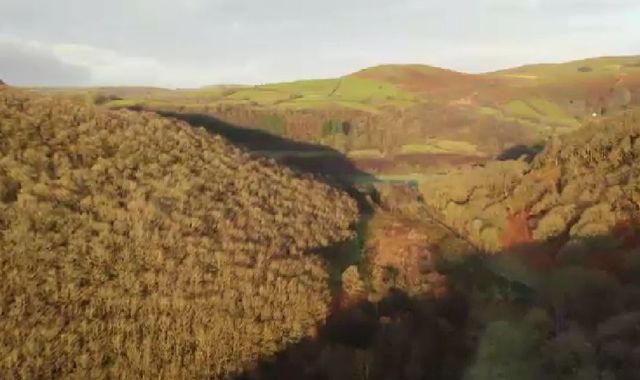 Rural farming communities in Wales could be “decimated” if blanket afforestation is allowed, according to the president of the National Farmers Union in Wales.

The warning comes amid large scale government plans to plant millions of trees across the country to create a new national forest.

But there is concern from some communities about the number of Welsh farms being sold to large-scale investment firms, which plan to create woodland to offset carbon emissions.

In the tiny Carmarthenshire village of Cwrt-y-Cadno, Frongoch Farm was sold earlier this year to Foresight Group – a multi-billion pound private equity firm based in The Shard.

It plans to plant thousands of trees across the valley.

“Those fields – that’s generations of hard work to produce grassland like that and to see it destroyed just for an investment company to being able to plant trees to me it’s incredibly upsetting,” says villager Sheila Davies.

A group of locals – led by John Llewellyn – are fighting plans proposed by Foresight, fearful that the afforestation will be largely made up of conifers that could damage soil and have a negative impact on the landscape.

“This area is threatened by a slow black blanket of fir trees. Our concern is an afforestation proposal has been agreed and a non-native company, with a non-native adviser and a non-native agent, is coming in to plant trees which we think are the wrong trees, in the wrong place for the wrong reason,” says Mr Llewellyn.

He stresses the locals are not against tree planting as a whole.

“But we need to get the right trees in the right place and for the right reason. What we’re looking at is the wrong trees for ecological and environmental purposes – we’re looking at a slow black blanket that will smother Nye Bevan’s tapestry and that blanket will pose a threat to biodiversity, to habitat to the environment,” he said.

The Foresight Sustainable Forestry Company told Sky News its plans to create new woodlands and forests are “recognised by the Welsh government as an important part of the twin fights against climate change and biodiversity loss”.

It added: “We will be planting a diverse species mix at Frongoch comprising over 25% non-commercial broadleaves. Foresight never plants trees on land that can support productive, commercial food crop growth.

“A key part of our approach to afforestation is always to consult and work with local communities before any planting begins.”

The Welsh government aims to plant 86 million trees by the end of this decade.

It says afforestation that is properly managed can offer a “considerable opportunity” to rural economies to create green jobs and harvest timber for high-value goods.

But it does admit the government “is keen to avoid outside interests buying up land”.

It’s not just locals who are concerned about farms being lost.

The National Farmers Union Cymru says any afforestation in Wales must be done hand-in-hand with farming – rather than replacing it.

John Davies is NFU Cymru president. He said: “There is a great deal of concern because family farms are the backbone of our rural communities in Wales and if you see this happening, that removes those families from those areas, and it removes those job opportunities for 30, 40 years.

“The employment opportunities in the forestry sector are not so plentiful as the agricultural sector.

“What we want to see is the forestry approach integrated into farming here. This isn’t an option of trees good, cows bad, this is about fully integrating our woodland approach into our agricultural going forward.

“If you’re seeing a monoculture approach to this and blanket afforestation – that’s a fundamental change and that’s not what we’re looking for in Wales. It’s decimation of that community really isn’t it?”

The Welsh government says it wants to work with Welsh farmers on its tree-planting scheme.

But Sky News has been told that across mid and South Wales, as many as 20 farms may have been sold to companies.

Owning land, the potential for timber revenue and being able to sell carbon credits to any company from trees planted are all valuable assets for those snapping up a slice of the Welsh countryside.

Share
Facebook
Twitter
Pinterest
WhatsApp
Previous articleNHS likely to lose nearly half of dentists after pressure increased to catch up on backlogs, profession warns
Next articleCOVID-19: Contingency plans drawn up over fears a quarter of public sector workers could be absent due to Omicron