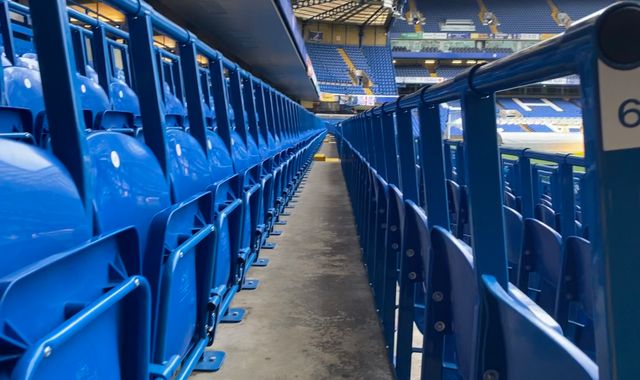 After almost three decades fans will now be allowed to stand while watching Premier League games – a move designed to prevent another stadium disaster according to a top safety expert.

The New Year rule change means that clubs that have been approved as “early adopters” and have installed rail seating in some parts of their grounds can finally permit fans to use them.

COVID-19 may have thrown the festive football schedule into turmoil but Chelsea, Manchester City, Manchester United and Tottenham are all ready to start allowing fans to stand in designated areas.

All seater stadiums became the norm in top-flight English football after the Hillsborough disaster in 1989 in which 97 Liverpool fans were killed.

The Taylor report in 1994 concluded a failure of police control led to the disaster and recommended converting major stadiums to all seater arenas.

The ban on standing though has been consistently flouted by sections of fans at some clubs particularly during big games.

Ken Scott from the Sports Grounds Safety Authority told Sky News: “What we can’t have is another disaster happening and the risks arising from people persistently standing in seated areas that aren’t designed for those people to stand is a real one.

“This (rail seating) is designed now to prevent the risk of what we call a progressive crowd collapse so it manages that risk but at the same time gives the fans the choice that they are expressing.

“It is really good that we have something in place now that hasn’t been as a result of a disaster or a tragedy occurring.”

Some Hillsborough campaigners and relatives had been against the idea but Liverpool fan Gareth Roberts from The Anfield Wrap podcast said he believes attitudes have evolved given the way safe standing has worked in other European stadiums and at Celtic in Scotland.

He told Sky News: “While I understand the sensitivities we need to move on now and accept that this is actually making grounds safer.

“The Spirit of Shankly (supporter group) has done surveys, families have even been up to Celtic and have seen how it’s worked. I think some of the more hardened campaigners who were against it for so long they have had a change of mind now and they can see that it is safe.”

Celtic have had rail seating for the past five years in one section of Celtic Park and have a code of conduct for fans who stand in it.

It’s something Mr Roberts has tried out himself and was hugely impressed by the atmosphere it created in the stadium. He said: “Straight away I felt much safer…you are standing up but you have got your space – you can’t fall backwards, you can’t fall forwards there is no domino effect.”

“You are giving fans the choice and that’s what fans have been asking for for years,” he added.

Chief Constable Mark Roberts, who leads football policing in Britain, told Sky News he wasn’t against the concept but said clubs have to make sure that fans stay in their designated spaces and don’t congregate in dangerous numbers in particular areas.

He said that standing can also make policing at football more difficult. He said: “We made recommendations that you shouldn’t have standing areas home and away fans adjacent to each other because that is a flashpoint.”

“It is harder to identify people shouting abuse, racist abuse,” he added.

“If people are stood up, it’s harder to identify if they are throwing missiles, pyrotechnics and again it presents challenges for policing if you are going into potentially overcrowded areas to try and arrest someone in the middle of it.”

Over 12,000 safe standing spaces have been created at Chelsea’s Stamford Bridge stadium which is over a quarter of the total capacity of 41,000.

Most are at the famous Shed End which used to house thousands of fans on open terraces behind one of the goals and will now see home and away fans given the option to stand.

Cardiff City also have “early adopter” status in the Championship but the temporary ban on supporters at games in Wales, due to COVID19 cases, means they are facing a delay in implementing the project.

A club spokesperson told Sky News it was frustrating but added: “We are hopeful of getting under way in our first home league fixture of 2022 – against Blackburn on January 15th.”

Kevin Miles of the Football Supporters Association said that it was now in the hands of the fans and the clubs as to whether safe standing is introduced to the other Premier League grounds: “I think people have waited for so long for this to happen that nobody wants to do anything to jeopardise it continuing” he said.

“Fans are probably the people most interested in safety in football grounds because we are the ones who suffer when it goes wrong so fans have a vested interest in making sure this works.”