COVID-19: Warning up to 40% of coronavirus vaccine appointments are no-shows 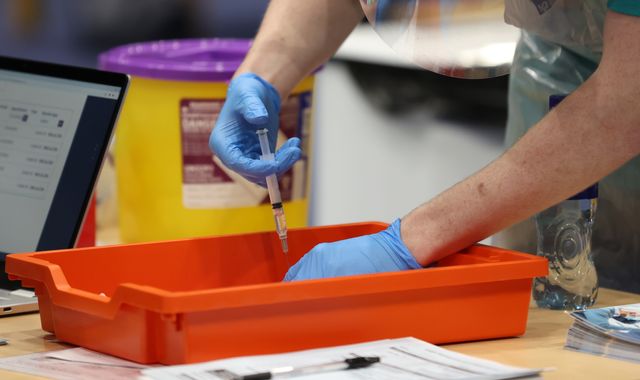 Health leaders have warned that up to 40% of vaccine appointments are no-shows, as the government claimed to have met its coronavirus booster jabs target.

The NHS Confederation said it was “encouraging” to see people coming forward and getting their COVID-19 jabs.

But it said it had heard reports that some sites were only a third full, despite cases of the Omicron variant continuing to rise “rapidly”.

Matthew Taylor, chief executive of the NHS Confederation, said some primary care leaders had told the organisation that people were not showing up to as many as 40% of their scheduled bookings.

“It is encouraging to see people still coming forward for their first and second doses, as well as the massive achievement on boosters,” he said.

“However, cases of Omicron are rising rapidly… Health leaders are worried about the level of illness and demand that their staff across the NHS could have to respond to in January and so, it is vital that everyone who is eligible takes up the offer of a jab or booster shot.

“Some primary care leaders are telling us their vaccination clinics are only a third full and that people are not turning up to as many as 40% of their booked appointments.

“While walk-ins continue to be on offer, they are calling on people to stick to their scheduled vaccine appointments and if they can’t for whatever reason that they cancel with notice as this will help manage pressures, particularly given the staffing crisis we are facing currently.”

There have been reports of anti-vaxxers deliberately booking vaccine appointments and then not showing up.

The comments come as the Department of Health and Social Care said it had met the goal set by Prime Minister Boris Johnson to offer all eligible over-18s in England the opportunity to get a booster jab by 31 December.

It is understood this is based on the take-up of the vaccines and those eligible being contacted.

Health Secretary Sajid Javid said he was “delighted” to confirm the goal had been reached.

“I am incredibly proud of the work the NHS has done to accelerate the programme and offer my thanks to the frontline staff, volunteers, Armed Forces and British public who have made it possible for us to meet this commitment,” he said.

Labour’s shadow health secretary Wes Streeting said: “While eagle-eyed observers will note that the prime minister shifted the goalposts on what he actually promised to deliver, this should not detract one bit from the fact that the NHS has pulled off an unprecedented number of vaccinations in recent weeks.

“Everyone involved should be enormously proud of what they’ve achieved, from volunteer vaccinators through to members of our armed forces drafted in to help.

“I urge everyone who has yet to receive their first, second or booster jab to book without delay.”

Initially, the target was to offer a booster jab to those eligible by the end of January.

But this was brought forward by a month in response to the identification and subsequent spread of the more transmissible Omicron variant of COVID.

On Wednesday, a total of 435,293 booster and third doses were reported in the UK, the highest daily total since 23 December.

More than 33.5 million booster and third doses have been delivered in the UK, including 1.8 million in the last seven days.