COVID-19: Calls for NHS staff to get priority access to coronavirus tests 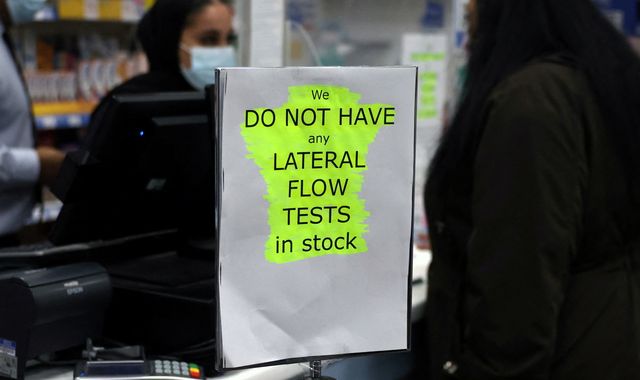 There are growing calls for NHS staff to be given priority access to coronavirus tests, amid concerns over staff shortages linked to COVID-19 and rising numbers of patients in hospital with the virus.

In recent days there have been widespread shortages of lateral flow and PCR tests for delivery on the government’s portal, with no PCR slots available across the UK on Thursday morning.

It comes as another 189,213 new COVID-19 cases were recorded in the latest 24-hour period, another record.

Health Secretary Sajid Javid has said the government will triple the supply of lateral flow tests to 300 million per month by February, but added that as current shortages persist “we expect to constrain the system at certain points over the next two weeks”.

Both the Royal College of Nursing (RCN) and the British Medical Association (BMA) have said health workers should be at the front of the queue when it comes to accessing COVID tests.

The BMA said there were more than 18,000 staff absent from acute hospital trusts in England for COVID reasons, either because they had the virus or were isolating.

It expects that figure to go up when the latest data is published later this week.

“That’s a step in the right direction but there is no assurance that key workers will be offered them first.

“The BMA is urging the government to do everything possible to ensure that enough tests are available for key workers as a priority.”

Labour’s shadow health secretary Wes Streeting echoed this call, saying NHS workers should be “at the front of the queue”.

“Shortages of tests and delays in getting results risks exacerbating the staffing pressures in the NHS and other critical national infrastructure,” he wrote on Twitter.

“I’ve written to the health secretary urging him to make sure that they’re at the front of the queue.”

The Welsh government said on Thursday that it would loan England four million lateral flow tests, bringing the total since the pandemic began to 10 million.

First Minister Mark Drakeford said: “Wales has a significant stock of lateral flow tests, sufficient to meet our needs over the weeks ahead.”

Threshold for more restrictions ‘hasn’t been crossed yet’

Meanwhile, latest figures show there were 11,898 COVID patients in UK hospitals as of 8am on 29 December.

This is up 44% in a week and the highest number since 2 March.

In England, the number of patients in hospital is at its highest level since February.

There has been a 34% week-on-week increase in hospital admissions across the UK, with 1,152 on 24 December.

But Chris Hopson, chief executive of NHS Providers, has reportedly warned that daily data on hospitalisations should be interpreted carefully.

Speaking to The Times, he said the lack of large numbers of seriously ill older people was providing “significant reassurance”, although he stressed this could change after the Christmas period.

“Trust CEOs know that the government has a high threshold to cross before it will introduce extra restrictions and can see why, in the absence of that surge of severely ill older people, that threshold hasn’t been crossed yet,” he said.