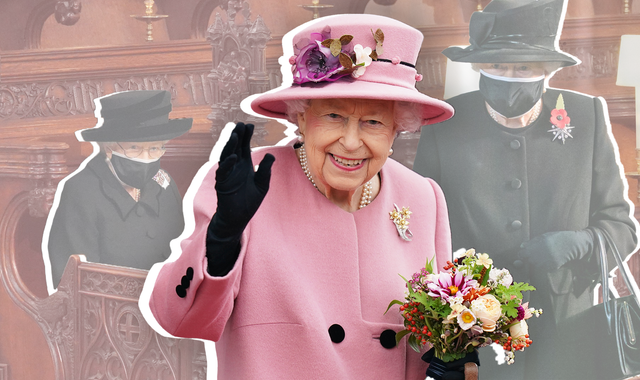 “Annus horribilis” is how the Queen described 1992 – her children’s complicated love lives and a fire at Windsor Castle bringing an unexpected public display of exasperation.

For 2021 no one has, so far, coined such a memorable description, but it does feel like it’s needed one after one of the most dramatic years for the Windsors in recent history.

Only when you stop and look back does it really hit you how incredible it’s been that the Queen has managed to publicly stay so upbeat.

The death of the Duke of Edinburgh in April at the age of 99, while not a complete shock after a spell in hospital, was certainly devastating for his wife and the rest of the family; the warmth and openness of their tributes is something I will never forget.

But as if coming to terms with that loss wasn’t enough for the 95-year-old monarch, the family troubles kept coming thick and fast.

We saw Harry and Meghan sitting down with Oprah, racism claims against the family, bullying allegations within the palace which Meghan has denied, and the compensation case brought against Prince Andrew over those allegations of sexual abuse that he has always said are without foundation.

What has 2021 really meant for the family?

Unlike 1992, the public acknowledgment of family issues has been limited.

Prince William did reply that they were not a racist family and who can forget the Queen’s “recollections may vary” statement in response to the Oprah interview.

They have tried to keep a dignified silence, however there’s no doubt the fact that family problems have constantly bubbled up has been a distraction.

On numerous occasions there have been days where I thought I’d be reporting on a planned engagement or a high-profile project and instead the focus has been on the latest twist about the Sussexes or Prince Andrew.

And yet throughout it all the determination of the royal family to keep calm and carry on would only have been clearer if they were wearing t-shirts emblazoned with the slogan.

We’ve seen them as cheerleaders for the vaccine roll out, Camilla gave the speech of her royal life about sexual violence against women, Kate and William have tapped into what COVID has meant for our mental health, COP26 was a chance for Prince Charles to hammer home that this is our last chance to tackle the climate crisis, as William joined his father to push for more ideas to tackle it.

And of course, there has been the Queen.

Her enthusiasm for her role shining through as she joked with the G7 leaders that they should look like they are enjoying themselves during a photocall.

Her desire to get back on the road and do as many public engagements as possible after being shut away because of the pandemic has been incredible to watch.

She genuinely looked like she was delighted to be out before doctors encouraged her to put the brakes on and rest because of an undisclosed illness.

Speaking to the various royal households next year is looking just as busy.

There are those events that royal watchers love, Kate and William both turn 40, Camilla turns 75, Prince Charles will mark various anniversaries or “legacy moments” for his charity work.

Prince Charles and the Duchess of Cornwall

Inevitably with his mother being unwell the attention around the Prince of Wales as heir has become greater, and along with the rest of the family he will continue to support her.

But after all his work around COP26, I’m told the Prince sees 2022 as a time to seize opportunities for innovation and new working partnerships that can come out of the climate crisis.

After his trip to Egypt in November it wouldn’t be a surprise to see him go back as they’re hosting COP27.

Camilla certainly now seems to have a greater conviction around her royal work, I’d expect to see more interesting things from her targeting sexual violence and domestic abuse, as well as continuing to be a positive advocate for older people.

For Kate, we should see more “major milestones” in her work supporting children and their families in the early years of childhood.

Meanwhile, Prince William will again focus on his Earthshot prize and I’m told for its second year “ambitions are high”.

And don’t forget overseas tours. The royals haven’t travelled to the likes of Canada, New Zealand and Australia, all important Commonwealth realms, in over two years, so trips there must surely be a priority.

Of course, it’s good to start a new year with optimism, although as we saw in 2021 there will always be things that are just out of our control, and for all their planning the royals are no different.

Like the rest of us COVID may again alter their plans and there are of course the ongoing matters for the family that travel from the other side of the Atlantic.

The court case against Prince Andrew is particularly difficult to manage. For over five years we’ve had statements from him and the palace saying the case from Virginia Giuffre is false and without foundation.

Since the compensation case was lodged it’s been like a game of chess with the toing and froing between the two sides as the legal arguments have played out.

Prince Andrew’s legal team are still aiming to get the case dismissed, we’ll see how that plays out in January.

And there are the Sussexes.

Since they stepped away from royal life, and they gave that interview to Oprah, their reputation in the UK has taken a dip.

But you cannot ignore the fact that they do still have a large global fan base who feel they speak for them.

I’m told that misinformation, veterans, vaccine equity, gender equity, and mental health will continue to shape their work in the new year.

Maybe over time, as they settle into their new life, the impact on the rest of the family will lessen, but already we know that won’t be the case next year with Harry due release a book about his royal life and questions over whether they’ll come back to the UK for the Queen’s platinum jubilee.

There is one thing I can say for certain.

From the start of the new year the palace will want you think about digging the bunting, union flags and your street party tables out of the loft and the garage, because in 2022 the Queen will mark her Platinum Jubilee – 70 years as monarch and a moment this country has never witnessed before.

For Her Majesty it will no doubt be another national event to bring people together, for the rest of us, it’s going to be a very striking celebration of her remarkable life of duty.

So, whether it’s in the form of overseas visits, engagements across the United Kingdom or that big weekend of events in June, the family will want the to be the primary focus whatever else may still be rumbling on for the Windsors.

Share
Facebook
Twitter
Pinterest
WhatsApp
Previous articleNearly 100 terrorists being considered for release by parole board after law change in wake of attacks
Next articleMass: The film exploring forgiveness in the aftermath of a US school shooting massacre