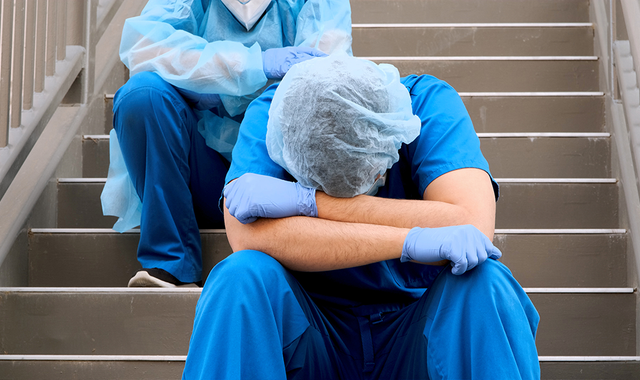 Exhausted and overwhelmed nurses are consistently working 12-hour shifts, in an effort to keep NHS services running, a survey has found.

A poll of more than 9,000 nursing staff in the UK for the Royal College of Nursing (RCN) discovered that lots of them are thinking about leaving the profession and are unhappy with the staffing levels.

The survey from October, which pre-dates the discovery of the Omicron variant, found that 74% of nursing staff regularly work longer hours than they should, often unpaid, with 17% admitting to doing it on every shift.

Many added that they were regularly working 12-hour shifts as standard and a third said they had not been able to take annual leave, which they say is detrimental to their own health and wellbeing.

Less than two-thirds of those surveyed (63%) said they had taken their full holiday entitlement.

Some 68% reported that they felt too under pressure at work, while 62% are too busy to be able to give the care they want to.

More than three quarters (77%) of staff admitted to working when they should have taken a sick day in the last year – 67% of which said their illness was stress related and 38% referenced their mental health.

On the future of their jobs, 57% of respondents said they were thinking about leaving, or had decided to leave, their current job – including for retirement.

NHS nurses have the biggest intention to leave, with 60% saying they want to quit – with the main reasons being pressures of the job and feeling undervalued.

One advanced nurse practitioner at an NHS hospital in Scotland said: “Our area is overwhelmed and unable to provide safe and high standard of care to our patients. Queues of patients out the door.

“I have always enjoyed my job and found it rewarding. It feels like we are sinking in quick sand with no way out.”

In the report’s foreword, Pat Cullen, general secretary and chief executive of the RCN, said: “Nursing is not a heroic deed, a selfless act or a vocation.

“Nursing is a safety critical profession, essential to society and it takes its responsibilities very seriously.

“The evidence in this report shows many of our members now find the pressure on them intolerable.”

She added: “As the pandemic moves into a third calendar year and now we face another COVID wave, our members talk vividly about the toll of the pandemic and years of understaffing.

“Nursing undoubtedly has the potential to be a hugely rich and satisfying career, but with tens of thousands of nursing jobs unfilled the situation is unsustainable.

“All nursing staff need funded and supported time out – not limited to annual leave – for all staff, regardless of which setting they work.

“Likewise, where staff have taken time off due to illness, rest and recuperation must be central to decision-making about their return to work. Proper mental and psychological support services need to be made available.”

RCN representative and London nurse Jodie Elliott said: “Every day we come in to do a good job; when you can’t do that because you don’t have the staff it breaks my heart.”

Share
Facebook
Twitter
Pinterest
WhatsApp
Previous articleIVF treatment: The companies paying for employees to start a family
Next articleNearly 100 terrorists being considered for release by parole board after law change in wake of attacks