COVID-19: What does the latest death and hospitalisation data tell us about Omicron? 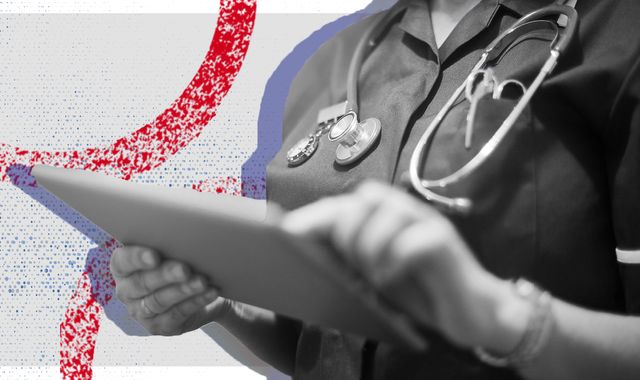 Throughout the pandemic, Sky News has tracked COVID data in an attempt to gauge the progression of the virus.

But there are times when the data does not tell the whole story.

Not long into the first wave, it became clear that a rise in cases was often matched by a rise in deaths after a time lag. Before the increase in deaths, came an increase in hospitalisations.

The Omicron variant appears – at this stage – to have weakened the link between cases, hospitalisations and deaths. Although it it more transmissible than Delta, Prime Minister Boris Johnson said the new strain is “obviously milder”.

While it is still early, the potential trend was discussed by the chief executive of NHS Providers, Chris Hopson, in a recent Twitter post. On 27 December, he posted there was more to the figures on hospital admissions than met the eye.

The number of patients in hospital who had tested positive for COVID had risen by 27% in the week up to 27 December, compared with the previous week.

But trust chief executives had told him that many of those who were being treated with COVID had actually gone in for other reasons and then tested positive once they had been admitted.

He said it was being described as “incidental COVID” and, at that point, trusts were not seeing a rise in the number of patients needing oxygen therapy or critical care because of COVID.

Trust managers were pointing out, however, it was necessary to watch the overall level of admissions – including those unrelated to coronavirus – to see if Omicron was causing major problems.

In the past few years, the true impact of COVID on the health system and people’s health in general has been suggested by figures for the number of excess deaths.

In November, we reported how researchers had calculated that 28 million years had been shaved off the lives of people around the world as a result of the pandemic up to that point – a combination of how many years all those who had died because of the virus – both directly and indirectly – would have lived if it had not happened.

The ONS has calculated that during the two main COVID waves in the UK, from March to around May 2020 and January to March 2021, between 25 and 100% more people were dying than would have been expected during the worst weeks.

Some of these may have died in hospital, but others may have died elsewhere, both from COVID and from other causes, potentially partly because the healthcare system was under severe pressure.

The average number of weekly deaths goes up and down depending on the time of year.

At present, there are no signs that the number of excess deaths is surging.

But the figures for deaths from any cause – which are released weekly by the ONS – only go up to the week ending 17 December.

In the weeks up to that date, while the number of weekly deaths has steadily risen – roughly in line with and about 10-15% ahead of the 2015-2019 average – the number of deaths both on which COVID is mentioned on the death certificate and directly attributable to COVID has actually dipped slightly in recent weeks.

Whether increasing numbers of those who have COVID mentioned on their death certificate die from co-morbidities is impossible to tell from the data released weekly as the full range of causes of death is not available.

But data on the number who die directly from COVID is available and, as yet, that number has not risen sharply.

If, as hospital trusts hint, many of the people who are being registered with COVID in hospital are not coming in because of the disease, but are ending up with ‘incidental COVID’ – a disease that may not kill them once they are being treated – perhaps English and Welsh hospitals will not see the rise in deaths that has twice followed a rise in hospital cases.

But without detailed data on deaths beyond 17 December, it is still too early to tell.

Chris Hopson concluded by saying that, because the NHS remains under severe pressure, it was too early to tell whether Omicron may still hit the NHS hard.

He said: “Striking how many chief executives are saying that, on current evidence, they think Omicron related staff absences may be a greater challenge than number of Omicron-related severely ill patients they have to treat. Several trusts told me today they’re now at point.”

What we can potentially say from the last 21 months is that when the healthcare system has been put under pressure, directly or indirectly because of waves of COVID, excess deaths have gone up.