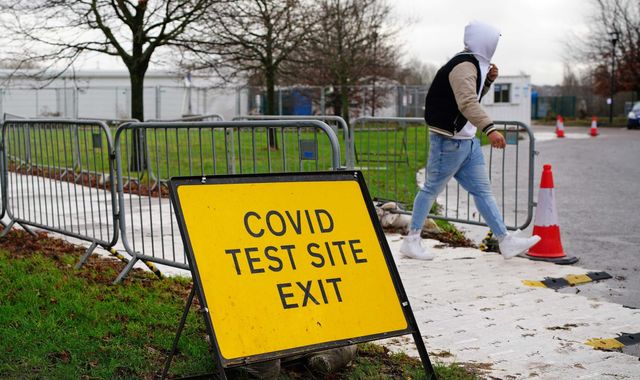 The UK has reported 189,213 new COVID-19 cases in the latest 24-hour period – a fresh record high in the pandemic, according to government data.

A further 332 people have died within 28 days of a positive coronavirus test, the highest figure since 2 March this year – but it includes a backlog of fatality numbers that were not fully reported during the festive period.

The data compares with yesterday’s previous record high of 183,037 cases (including five days of delayed Northern Ireland data) along with 57 deaths reported, while this time last week 119,789 cases and 147 deaths were announced.

It comes amid surging cases of the more transmissible Omicron variant and a rise in the number of patients in hospital who have tested positive for COVID.

Some 11,898 patients were in hospital with COVID yesterday in the UK – over 1,000 more than the previous day. This latest figure is the highest since 2 March. The data showed 868 people were on ventilation beds.

This is up 61% from a week earlier and is the highest number since 26 February, according to figures from NHS England.

According to recent data, 71% of COVID patients in hospitals in England were primarily being treated for coronavirus.

Meanwhile, leading scientists have warned that ongoing shortages of COVID tests across the UK are a “great concern” as Boris Johnson was accused of “mixed messaging” ahead of New Year’s Eve celebrations.

In recent days, there have been widespread shortages of lateral flow and PCR tests for delivery on the government’s portal, with no PCRs slots available across the UK this morning.

Health Secretary Sajid Javid says the government will triple the supply of lateral flow tests to 300 million per month by February, but added that as current shortages persist “we expect to need to constrain the system at certain points over the next two weeks”.

Nightclubs have been ordered to close in Scotland and Wales, while Edinburgh’s traditional Hogmanay street party has been cancelled and Scots are being encouraged to limit gatherings to no more than three households.

But, in England, the prime minister has not introduced any further restrictions for New Year’s Eve, even though he has urged people to celebrate in a “cautious and sensible way” and suggested they test themselves prior to meeting with others.