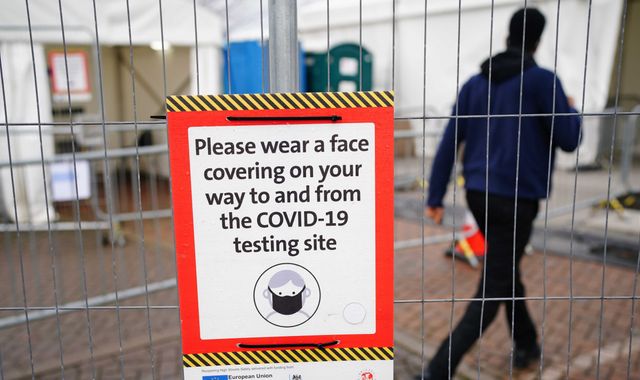 The UK has reported a record 183,037 new COVID cases in the latest daily figures.

The number includes five days of infection data from Northern Ireland – 22,972 cases – due to a lag in reporting over Christmas.

It is the first time since 24 December that all four UK nations have released daily case numbers.

A further 57 people have died in the UK within 28 days of a positive coronavirus test.

The figures compare with a previous daily high of 129,471 cases and 18 COVID-related deaths reported yesterday, while 109,655 cases and 140 deaths were recorded this time last week.

More than 90% of cases in England and approximately 80% of cases in Scotland are now the Omicron variant, it’s also been revealed.

It comes as another 1,213 people with COVID were hospitalised in the UK on 21 December (the most recent figure for daily data) and the highest since 19 February when there were 1,274.

It takes the total number in hospital to 8,246, said the government’s daily dashboard. That is the highest since 16 November when there were 8,478.

The latest NHS data suggests 71% of COVID patients in hospitals in England on 21 December were primarily being treated for the virus.

In London, the data shows 437 COVID patients were admitted to hospital on 27 December – the first time daily admissions have exceeded 400 since 1 February when there were 421.

Meanwhile, Boris Johnson has urged the public to enjoy New Year celebrations in a “cautious and sensible way” as he continued to push forward the vaccination programme.

The prime minister encouraged people to book booster jabs or first and second doses as he said the vast majority of people in intensive care have not had a booster.

No new restrictions are being brought in for England ahead of New Year’s Eve, while in Scotland and Wales nightclubs are currently not allowed to open, and the rule of six is in place for pubs and restaurants in Wales.

In Scottish pubs, a one-metre distance must be maintained between tables, groups of people meeting will be limited to three households, and alcohol must be served at the table.

First Minister Nicola Sturgeon said it is her “expectation” that new COVID restrictions in Scotland will be in place until 17 January, as she urged people to “stay at home right now more than normal”.

Share
Facebook
Twitter
Pinterest
WhatsApp
Previous articleDeclan Jones: Ex-police officer jailed for attacking members of the public found dead
Next articleCOVID-19: Boris Johnson says ‘up to 90%’ in intensive care have not had a booster and urges people to get jabbed