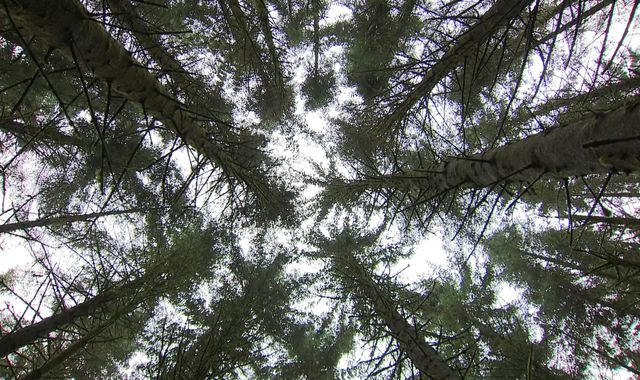 They say ancient woodland is being damaged by non-native species and that plans for large scale planting will make the problem worse.

They have been supported by the TV naturalist Chris Packham, who says that harming native trees risks aggravating a “biodiversity crisis”.

Scotland is the most wooded nation in the UK and its government plans to increase coverage from 19% to 21% of the country by 2032.

Most of the trees will be fast-growing, non-native species like Sitka Spruce, which are typical of US timber plantations.

Trees, including the imported species, help to combat climate change by soaking up harmful CO2 emissions. However, environmental campaigners question the type of trees being planted and their proximity to native woodland.

Audrey Baird from Rhu, Argyll and Bute, is among a group of campaigners who have lodged a petition with the Scottish parliament calling for the legal protection of native woodland.

She told Sky News: “My big worry is that we’re going to be covering our countryside with all of this monoculture, non-native forestry that’s from North America mainly, and it just shouldn’t be here in Scotland.

“They out-perform our ancient oak trees and other native trees, they just take over.

“The seeds get blown around on the wind, they get into our ancient and native woodland and they block out all of the light.

“They just kill everything. It is totally irresponsible and short-sighted.”

He said: “Ancient woodland doesn’t necessarily mean old trees, it means trees being there for a long time – established, robust communities of plants and animals that will continue to flourish if we allow them to do so.

“It’s not just about the trees, it’s about all the fungi under the ground and the biodiversity that thrives because the trees are there.

“It’s not just a climate crisis, we’re in the midst of a biodiversity crisis, too. We lose all that life, we lose our life, so protecting these ancient woodlands is absolutely paramount.”

Scotland’s 19% of forest and woodland coverage compares with 15% in Wales, 10% in England and 9% in Northern Ireland. The figures are beneath the average figure in European Union countries of 38%.

In response to the claims by environmentalists, the Scottish government questions the assertion that native woodland was being lost.

A spokesperson for the government agency, Scottish forestry, told Sky News: “Protecting ancient woodland is vital and there is work ongoing to do this.

“There is no evidence to suggest that ancient woodlands are being lost to non-native tree regeneration in the way described. The current, principal threat to our ancient woodlands is from selective browsing by deer, which tend to prefer broadleaves.

“To tackle the twin crises of climate change and nature loss we need to plant a balance of mixed woodlands. We need broadleaves to boost the environment and nature and we need conifers for climate change as they lock up carbon faster, provide jobs, and bring around £1 billion to Scotland’s economy. We’re planting 80% of all woodland in the UK according to this balance.

“Sitka spruce is just one of a range of species that are planted on woodland creation schemes in Scotland. We do not allow sites to be planted with only one species and proposals are approved to benefit a range of priorities, including people, nature and the economy.”

Stuart Goodall, chief executive of CONFOR (Confederation of Forest Industries), the membership organisation for forestry businesses, said: “We’re all concerned about ancient woodland, we all think it’s incredible and very precious. At the same time, we need other types of forest to provide the wood products that we require for our everyday use.

“It will also help us de-carbonise, because if we’re going to achieve net-zero, we need to be using wood more often. For example, to replace steel, concrete and brick in the construction sector.

“The important thing for ancient woodland is that they are managed. If there are trees which are being blown in, by actively managing them we take them out and we would absolutely support that, we want to see our ancient woodland protected.”

On biodiversity, he added: “(On the basis of) the work that we’ve done to understand the biodiversity that exists in modern productive forestry, in terms of absolute numbers there’s not a huge difference.”