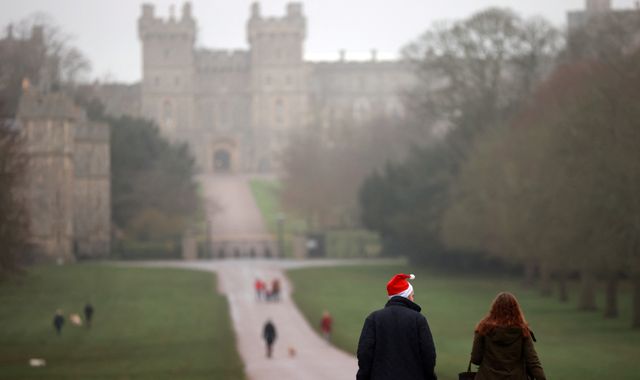 Priti Patel has ordered a review of the laws surrounding crossbow ownership.

Under current legislation, people over 18 can legally purchase or possess a crossbow without needing a licence or any checks.

A Home Office spokesperson said the department has been instructed by the home secretary to look at possible ways to “strengthen controls” on the weapons.

It comes after a 19-year-old man armed with a crossbow was arrested at Windsor Castle on Christmas Day.

The Metropolitan Police said the individual, who is from Southampton, has been detained under the Mental Health Act.

“Crossbows are subject to controls and legislation is in place to deal with those who use them as a weapon,” a statement from the Home Office spokesperson said.

“At the home secretary’s request, we are considering options to strengthen controls on crossbows. Work on this has been ongoing throughout the year, and we keep all relevant laws under review to maintain public safety.”

Police are also reviewing a video which appears to show a masked figure in a dark hoodie holding a crossbow and addressing the camera with a distorted voice, saying they wanted to “assassinate the Queen” in a “revenge” mission.

The Queen has been spending Christmas at Windsor this year with Charles and Camilla and Prince Edward and Sophie, the countess of Wessex, after cancelling the traditional plans at Sandringham due to COVID.

Whitehall sources have reportedly said that officials had been instructed to “incorporate any lessons” from the Windsor Castle incident into a review of crossbow laws, according to the Daily Telegraph.

At present, crossbows can also be considered offensive weapons and are prohibited from being carried in a public place without lawful authority or reasonable excuse.

Demands for tighter regulation initially began after the five-day inquest into the death of Shane Gilmer in April.

Mr Gilmer, 30, died after his neighbour, Anthony Lawrence, broke into his house in January 2018 and shot both him and his partner Laura Sugden.

Submitting a report to Ms Patel in May, the coroner, Professor Paul Marks, said he was concerned there is “no ongoing control, record or licensing requirement” for crossbows, unlike for firearms.

He added that, due to this, “the police have no record of who owns crossbows, how they are stored (or) the number that are in circulation”.

The coroner called on the government to review the Crossbows Act 1987 and the Offensive Weapons Act 2019, “with the intention of regulating the sale and possession of these lethal weapons”.