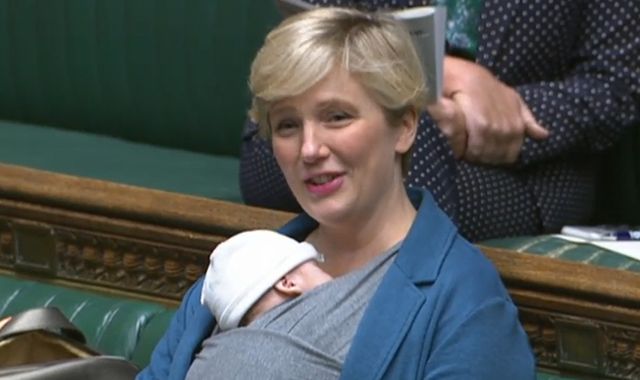 The Commons Speaker has said he is in favour of allowing MPs to bring their babies into the chamber for debates as long as they don’t disrupt proceedings.

Under the current rules, MPs can bring their young children with them when voting but not when participating in debates.

But Sir Lindsay Hoyle has now said he believes whoever is chairing the debate should be allowed to make a call on whether to allow babies in.

A parliamentary review into whether the rules should be updated is ongoing.

Labour MP Stella Creasy brought her three-month-old into parliament in November and received an email reminding her it was not allowed.

After Sir Lindsay asked the Commons Procedure Committee to look into the matter, Ms Creasy said she was “pleased to hear” the issue was being examined.

“(I) hope this means some of these rules will be reviewed to make parenting and politics possible to mix,” she added.

Sir Lindsay has told the Daily Telegraph he believes the chair of each debate should be allowed to decide on the day whether the presence of a baby is impeding discussions.

Referencing Ms Creasy’s son, he said: “I saw that baby come into the chamber when I was in the chair.

“And did it affect the debate? No. Was it a quiet and peaceful baby? Absolutely. Did it disrupt? Not in the slightest. So did it matter to me? Absolutely not.

“What I would say, and I’ll be quite honest with you, is each chair will make a decision. Unfortunately, it’s become highly political.

“It is now for others to decide, that’s why the committee is reviewing it. And I will then have to respect (that decision).”

Ms Creasy’s young son Pip has regularly attended the Commons, as did her older daughter and the babies of other MPs.

Deputy Prime Minister Dominic Raab told Sky News he had “quite a lot of sympathy with Stella” and had seen “lots of mums and dads with their very, very young children, babies, in the House of Commons”.

“We want effective, functioning chambers both in Westminster and the House of Commons but we also need to make sure that we’re in the 21st Century…” he said.

“I think we have to try and make that as flexible as we can,” Mr Raab added.

Labour MP Alex Davies-Jones said the rule was a “complete contradiction” because she had received an assurance from Sir Lindsay that she could breastfeed in the chamber.

Caroline Lucas, the Green MP, described the rule as “absurd” and something that “absolutely needs to be challenged”, adding that babies are “far less disruptive than many braying backbenchers”.