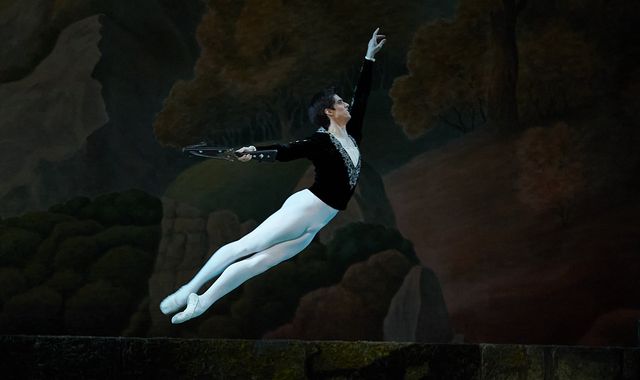 Xander Parish describes his route to the top as a Cinderella story complete with fairy godfather, who plucked him from the ranks of the Royal Ballet and propelled him to principal dancer at St Petersburg’s Mariinsky Ballet seven years later.

"Cinderella or Billy Elliot?" I ask.

There’s a tiny hint of an eye-roll, probably the gut response of most male ballet dancers when they’re asked about the film, where a young working-class boy discovers a love of ballet during the miners’ strike in the 1980s.

"Closer to Cinderella to be honest. I’ve never been down many coal mines, I can’t say there were many similarities," he says.

Parish, originally from Hull, started dancing at the age of eight and was accepted into the Royal Ballet school three years later. It was, he says, a sheltered life.

"We were locked away in a beautiful, royal hunting lodge in Richmond Park for five years which was amazing but I never really ventured out. My vision was focused on one thing. So it’s certainly broadened my perspectives a lot by coming here!"

It was a leap of faith. He was 21 and knew nothing about the country, his impressions mostly based on Bond movies where the villains were often Russian. The Russian ballet world is not a multilingual place and the language was an endless struggle. He once ended up with a tooth through his lip after a ballerina’s elbow smashed into his face. He hadn’t understood what she was asking him to do.

"When I first came here, I was like, ‘oh my goodness, everyone’s so cold, and unfriendly’. But they weren’t. It’s just that they didn’t know me so they weren’t open. I’ve made friends here who I’ll have for life and they are the most loyal, kind people you can imagine."

In 2017, Parish was awarded an OBE for furthering relations between the UK and Russia, an award he describes as an incredible honour. He’s saddened by the fact there is so much mistrust between the two nations.

"There’s so much that we have in common and if I can be one link in that chain that’s been so badly damaged recently, this really means something."

He calls the Mariinsky the mecca of classical ballet. It competes with Moscow’s famous Bolshoi Ballet, as top class as each other though they both have their distinct styles. Unlike the Bolshoi though, the Mariinsky has not enjoyed a six year, multi-million pound refit and backstage it shows. But there’s a charm to that, the history of this Russian classical ballet institution filtering through in the well-worn staircases and corridors.

The atmosphere in the male dancers’ dressing rooms is relaxed. It is hard to imagine the characters lolling around in slippers are about to be transformed into evil sorcerers and jokers, tracksuits hiding the colossal power in their legs.

Moments before the curtain goes up for an evening performance of Swan Lake and it’s still pretty relaxed. The performers limber up on stage as cleaners sweep the boards. A row of swans practise their famous pas de quatre – the dance of the little swans – in trainers and Christmas socks. I feel much more nervous about the rapid march of time than the dancers seem to.

Ballet master Yuri Fateev is with his team till the last minute before taking his seat at the back of the auditorium to make sure each line in the swans’ corps de ballet is correct. He watches every performance. Just before the curtain goes up, he shakes Parish’s hand. "Be as good as you always are," he says.

Fateev is the man Parish calls his fairy godfather, who spotted him in London and invited him to the Mariinsky. At first, Parish didn’t think he was serious. A year later Fateev asked again. Parish was feeling increasingly frustrated just carrying spears in the Royal Ballet. A month later, he was a on a plane.

"I saw in the class a beautiful young man who was probably just first or second season with the company and he paid such attention to my corrections and worked so hard," Fateev says. "But he was very weak as a dancer."

Twelve years’ hard graft with the Mariinsky has trained that out of him. As the Prince in Swan Lake, Parish lights up the stage. It is only a shame there are not more solos, Swan Lake – as with much classical ballet – more a question of allowing the prima ballerina to shine than her partner. It is perhaps the only profession where women rather than men have tended to steal the limelight.

"Rudolf Nureyev (the Soviet ballet dancer) obviously made the male dancer into a star in his own right," Parish says. "He’s done great things for male dancers and for that image, but even so. In classical ballets like Swan Lake, the ballerina is the first and the male dancer has to be the guy in the background."

But the solos, when he has them, are magnificent. Parish moves with extraordinary grace and power, a performance enhanced by the emotion he brings to the role. The audience seem as enthused of him as they are of the prima ballerina, the supremely elegant Viktoria Tereshkina.

I ask him what he thinks it takes to get where he has. "There’s only one route to the top of any any profession, I think and that’s entire focus," he says.

"I didn’t have a social life for 20 years. I’ve literally worked my socks off to get to where I am and I I don’t claim to be the best dancer around. But I was very tenacious. I wouldn’t give up and I really wanted to succeed.

"I think it’s just a matter of keeping distractions to a minimum and focusing on one thing, and if you’re giving it your all, put your heart and soul into it, people can achieve a lot more than they realise."