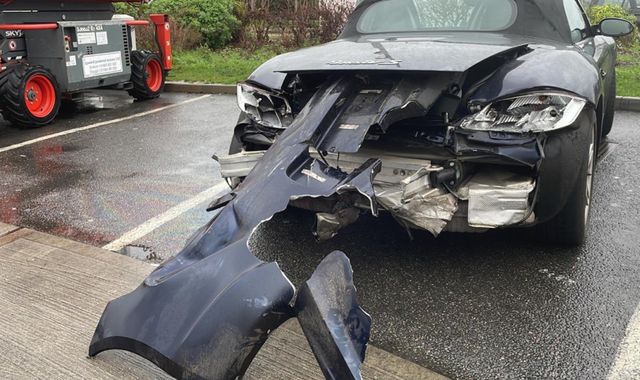 A motorist left police “shocked” after driving his Porsche for more than 30 miles with the rear end of his vehicle hanging off after a crash on the M25 in Kent.

PC Serge Hadfield from Surrey Police stopped the vehicle after it was reported by a member of the public on 26 December.

The officer was surprised to see the bumper “literally bouncing out of the small boot”.

“(He) also couldn’t believe that we had only had one call on it at the time,” Surrey Police said.

They tweeted an image of the vehicle showing damage to the back of the car.

“We stopped this vehicle seen driving on the #M25 near Cobham,” police wrote.

“The driver told officers he had crashed the car on the M25 in Kent and thought it would be OK to continue the journey in this condition.”

The driver, aged late 50s to early 60s, was pulled over at Cobham Services in Surrey after being picked up at junction nine.

Police said he gave a positive breath test, but was under the prescribed limit.

The vehicle has been “prohibited from use on the road” and the driver has been reported for driving a vehicle in a dangerous condition.