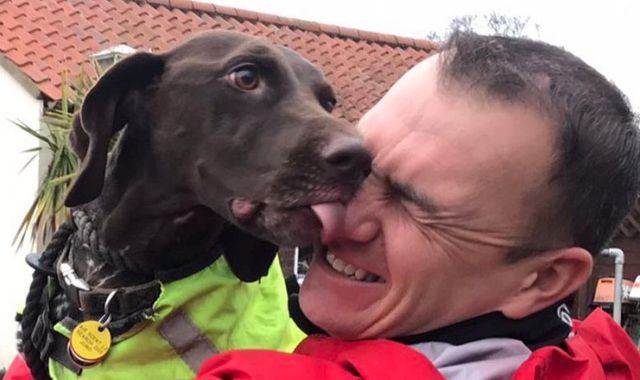 A search and rescue dog who was missing for six days over Christmas has been safely returned to her owner.

Juno, who helps find missing people for Norfolk Lowland Search and Rescue, became the subject of a large-scale search herself after getting lost on a family walk on 21 December.

More than 85 people from Norfolk, Sufffolk, Cambridgeshire, Buckinghamshire, and Kent search and rescue teams were involved in finding the German shorthaired pointer

Boats, thermal cameras, and drones had all been employed in the search. She had wandered into long grass in woodland around five miles outside of Great Yarmouth last Tuesday.

After extensive searching across the area, Juno was finally spotted by a drone operator on Monday morning, close to where she went missing on the banks of the River Waveney, near Gorleston-on-Sea.

Her owner Ian Danks was incredibly relieved that she was found alive and well after he had been out looking for her every day.

“She doesn’t look bad, does she? We’ve got lots of leftover turkey, so she can have that, after a trip to the vets.”

After she was spotted, a boat team moved in to retrieve her from an inaccessible area, before she was reunited with owner Ian.

Norfolk Lowland Search and Rescue confirmed that Juno had later gone for a check-up at the vets, and apart from some sore paws, she was in good spirits.

Before she was found, a social media appeal had gone out to help find the dog, which reached over 500,000 people.

People responded with delight when news of her safety was announced on Facebook.