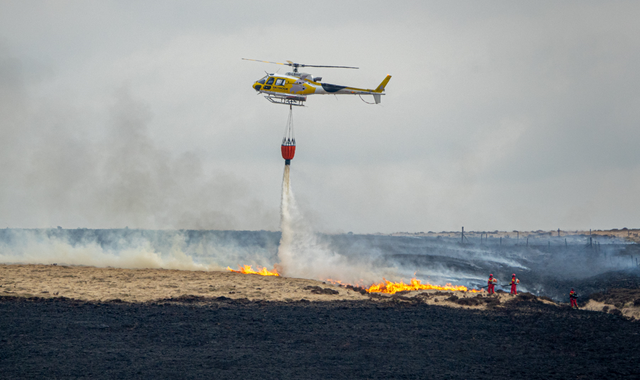 Throughout the year, a handful of extreme weather events and unseasonal weather conditions caused devastation across important landscapes and coastlines, the charity has said.

A very dry March and April saw wildfires rip through the Mourne Mountains in Northern Ireland and Marsden Moor in Yorkshire, affecting 200 hectares and 520 hectares of land respectively.

While the recent Storm Arwen caused uprooting of significant trees in northern parts of the country, at a time when ash dieback is prevalent due to warmer and wetter winters.

During April, the Dorset coastline saw a significant 300-metre cliff fall – the largest in around 60 years – undermining the stability of the cliff, and affecting coastal habitats.

A number of factors are believed to have contributed to this, including prolonged periods of dry weather as well as rain and erosion over a number of years.

Changes in climate have meant some parts of the UK’s wildlife have lost out, however it’s given the opportunity for some species to thrive.

Ben McCarthy, head of nature conservation at the National Trust, told Sky News that bird species including skylark, meadow pipit and snipe are among those that have been negatively impacted.

However, wildflowers such as pyramidal orchids, bird species including common and arctic terns and beavers have benefited from the changing climate.

Mr McCarthy said the climate and weather patterns “are out of sync with the natural biology and chronology of much of our wildlife”.

He continued: “So the species that we’re familiar with, things like peacock butterflies for example, have evolved to emerge in the spring when they’re expecting warm weather such that they can feed and breed.

“This year we saw butterflies take quite a significant hit and we think that’s because there was a cool spring but critically that was followed by a very wet May.

“So you have this kind of cascade through the food web, through the ecosystems which is a very big challenge impacting on our wildlife very significantly.”

He added: “More conservation work is needed – we need to be courageous and bold in taking the big steps.

“We know how to restore nature, the challenge really in the UK is that we’re not doing so to a sufficient scale to offset some of these drivers of change, like climate change.”