COVID: Boris Johnson to be briefed on latest Omicron data ahead of decision on restrictions – as 1.5 million booster jabs available this week 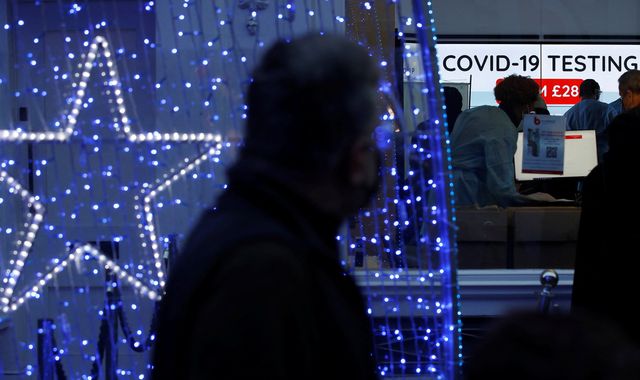 Boris Johnson will be presented with the latest COVID data today as he considers whether to impose fresh restrictions in England.

The prime minister has been urging people to “get boosted now” as the highly transmissible Omicron variant of the virus drives up infection numbers, prompting fears the NHS could become overwhelmed.

More than 1.5 million COVID-19 vaccination appointments are now available between today and 3 January.

Over 60% of UK adults have now received a top-up, but the NHS’s top doctor has put out a fresh call asking those yet to get a booster to come forward for their third dose.

“The evidence is clear that two COVID jabs is not enough, and with the Omicron variant, there is no time to delay getting your booster,” said Professor Stephen Powis.

The PM is expected to be briefed by Chief Medical Officer for England Professor Chris Whitty and Chief Scientific Adviser Sir Patrick Vallance later today, after new restrictions were implemented in Scotland, Northern Ireland and Wales on Boxing Day.

What could the PM decide?

If the data is positive, Mr Johnson could stick to current, lighter touch measures under Plan B, perhaps with some extra words of guidance.

If the figures show rising infections are starting to put unmanageable pressure on the NHS, he may deem it necessary to intervene with more stringent restrictions.

According to a report in The Times, weddings and funerals would be allowed to go ahead regardless of any wider restrictions.

On Friday, 122,186 COVID-19 cases were reported in the UK, which is the highest number of positive tests ever recorded in a single day.

The UK Health and Security Agency (UKHSA) said 23,719 cases of Omicron were detected among them, taking the total number of Omicron cases to 114,625 as of Christmas Eve.

Daily case reporting will resume today after it was paused over Christmas Day and Boxing Day.

The latest phase of the government’s Get Boosted Now campaign saw text message reminders asking people to book in for a booster sent out nationwide on 26 December.

It follows new vaccination centres opening across the nation in football stadiums and shopping centres – with some even remaining open on Christmas Day in England – as the race to jab as many people as possible continues.

Nightclubs, restaurants and outdoor events are among those affected by new rules introduced in Northern Ireland, Wales and Scotland to curb rising coronavirus cases.

No new measures have been announced for England but the government has not ruled out that ministers could meet today to discuss the possibility of introducing restrictions.

The rules across the rest of the UK are as follows:

A limit of six people, or 10 from a single household, are allowed in indoor hospitality settings in Northern Ireland from today.

Weddings and civil partnership celebrations are exempt from these rules and children not counted in the total.

It is also being “strongly recommended” from today that household mixing should be reduced to a maximum of three households, while businesses are being told to take “reasonable measures” to implement two-metre social distancing in office spaces.

Further restrictions have been placed on the hospitality sector in Scotland from 5am this morning.

The new rules force nightclubs to shut their doors and allow only table service in places that serve alcohol.

They also ask people to maintain a one metre distance from one another in hospitality and leisure settings.

From Boxing Day, only 100 people may attend indoor events where people are standing, or 200 for seated events inside.

A limit of 500 people is imposed on outdoor events.

Nightclubs are now closed in Wales and only six people are allowed to meet in pubs, restaurants and cinemas from 26 December.

Social distancing of two metres must be observed in public places and offices.